A menacing, persistent charger that will haunt you.

The Scuttle is an enemy that appears in the Sonic Boom series. It is a mass-produced model of Destruction Troops created by Lyric the Last Ancient.

The Scuttles resemble a cross between a tank and a spider. Colored orange and brown, they have a tank-shaped body with a cannon on top, a large black eye with a slit-like pupil and green sclera up front, and a dome-shaped engine below their rear that keeps it afloat. Additionally, they have a pair of front legs with a bulky front section and claw-like feet.

The Scuttles were created in the Robot Facility by Lyric the Last Ancient five millennia ago to help him destroy the earth's lifeforms and conquer it.[1] During an attack on the remaining Ancients however, the Scuttles were shut down when Lyric was imprisoned.[1][2] When Lyric escaped in the present day, he recovered them to search for the Crystal Shards and battle Team Sonic too.

The Scuttles are only found in Seaside Jungle. In gameplay, they move back and forth idly until they spot the player, at which point they will rev up and try to ram the characters. Sometimes, they are equipped with purple shields that protect them from harm. However, these shields can be removed with the Enerbeam or plowed through with a Sprint empowered with the "Mega Sprint" upgrade. The player can also only destroy a Scuttle briefly as a new one will later respawn to take its place. Additionally, the sixth Toy the player purchases from Q-N-C's Toy Shop will be a Scuttle figurine.

After Team Sonic and Shadow defeated Lyric, the Scuttles were stopped once more.

The Scuttles are usually mindless and silent drones unwaveringly loyal to Lyric the Last Ancient, having been programmed to obey his every command.[1] Among the Destruction Troops, the Scuttles are particularly menacing and persistent chargers that will haunt their foes. 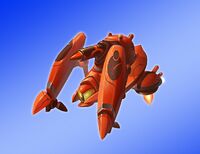