Is he upside down on the ceiling? Or right side up? Either way, he'll take you down.

The Scrawl is an enemy that appears in the Sonic Boom series. It is a mass-produced model of Destruction Troops created by Lyric the Last Ancient.

The Scrawls are bulky red robots with gray joints. Their upper body resembles a hunchbacked and wide humanoid torso. Instead of a head, they have a neck on their chest that connects to a large black eye with green sclera and thick eyelids. They also have two arms with four points of articulation, thick forearms, rolling spikes for hands, and a small pelvis with a few laser barrels on the bottom.

The Scrawls were created by Lyric the Last Ancient in the Robot Facility five millennia ago to help him destroy the earth's lifeforms and conquer it.[1] During an attack on the remaining Ancients however, the Scrawls were shut down when Lyric was imprisoned.[1][2] In the present day, they were recovered by Lyric after he escaped to search for the Crystal Shards and battle Team Sonic too.

The Scrawls are encountered in Scrapyard and Shadow Canyons. In gameplay, they normally move around on the ceilings, but they can also be found walking on the floors in rare cases. Notably, they constantly emit a red targeting laser. Shortly after they see the playable characters pass them, the Scrawls will constantly shoot a laser perpendicular from the surface they are on while pursuing the playable character along the surface they hang onto until they hit them. However, they cannot cross corners or walls and their laser cannot reach into corners. Also, if the player gets far enough away, they will cease their attack. In addition, even if a Scrawl is destroyed, a new one will later respawn to take its place. Also, the fifteenth Toy the player purchases from Q-N-C's Toy Shop will be a Scrawl figurine.

After Team Sonic and Shadow defeated Lyric, the Scrawl were stopped once more.

The Scrawls' unique hands allow them to climb on any surface. They are also equipped with barrels that can fire intense energy beams. 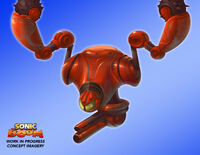