Scrap Brain Zone (スクラップブレイン[2], Sukurappuburein?, lit. "Scrap Brain") is the fifth Zone in Sonic the Hedgehog (8-bit). Similar to the other Zones in the game, Scrap Brain Zone is composed on three Acts, but features no boss battle in the third Act.

Similar to its 16-bit counterpart, Scrap Brain Zone is a large, polluted factory area located on South Island. Many buildings of several colors can be spotted in the background, polluting an orange sky. The floors are made of light gray metal with warning signs.

During his quest for the Chaos Emeralds, Dr. Robotnik built Scrap Brain Zone on South Island as his personal base. Later, Sonic the Hedgehog arrived in the Zone, plowing through the Badniks guarding the Zone and evading its traps. Eventually, Sonic found Robotnik. However, during his pursuit of Robotnik, the doctor managed to reach a flying plaform which took him to his ship, high in the sky. When the platform returned however, Sonic used to follow Robotnik to his ship.

Some time later, Sonic used the six Chaos Emeralds to revert the pollution made by Scrap Brain Zone on South Island and deactivated the base.

Scrap Brain Zone is a slow-paced Zone. It is much more straightforward and easier than its 16-bit counterpart. The most basic obstacles the player may find are electric generators. Bottomless pits can also be found in Act 1. Act 2 also features many teleporters, which the player can use to teleport to other places. Acts 2 and 3 features switches, which can be used to open doors. 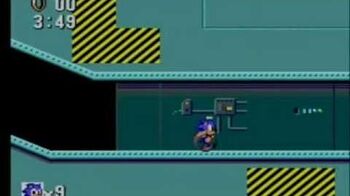