Sonic News Network
Register
Don't have an account?
Sign In
Advertisement
in: Articles in need of expanding, Sonic the Hedgehog (1991) Zones, Eggman's bases,
and 3 more
English

For other uses of the term, see Scrap Brain (disambiguation).

Sonic in Scrap Brain Zone, from Sonic the Hedgehog (16-bit).

A metallic base with some polluted ruins underneath it.

Scrap Brain Zone (スクラップブレインゾーン[3], Sukurappubureinzōn?) is the sixth Zone of Sonic the Hedgehog (16-bit), and its numerous ports and remasters. As with other Zones in the game, Scrap Brain Zone is composed of three Acts.

Scrap Brain Zone is Dr. Robotnik's center of operations on South Island. It is a polluted, industrialized factory zone made of light gray metal built over some half-submerged ruins. Dozens of various industrial buildings with blinking red and yellow lights are visible in the distance, with thick gray smoke leaking from their chimneys and into the smoggy brown sky that dominates the background of the first Act. In Act 2, the background changes to the interior of the base. Here, the floors and walls are lined with pipes, chassis, and meters. Also, yellow and black hazard stripes decorate various aspects of the Zone. Inside, the factories are lined with olive green metal instead and filled with even more gizmos, purple lights, red and silver pipes, and numerous connectors.

In Scrap Brain Zone Act 3, the player has to explore some ruins made of plain white stone bricks and flooded with polluted pink water. These ruins are decorated by slimy green algae, light blue and green crystals, pillars, and vines.

During his quest for the Chaos Emeralds, Dr. Robotnik built Scrap Brain Zone on South Island as his personal base.[1] Later, Sonic the Hedgehog arrived in Scrap Brain Zone, plowing through the Badniks guarding the Zone and evading its traps. Eventually, Sonic found Robotnik, albeit on the other side of a barrier. However, in an attempt to dispose of Sonic, a maniacally-laughing Robotnik stepped on a Switch, thus causing the floor underneath Sonic to cave in and leave Sonic to fall into some polluted ruins underneath Scrap Brain Zone. However, Sonic managed to escape the ruins and reach the Final Zone.

Scrap Brain Zone is full of various pitfalls and hazardous traps. These are mostly flamethrowers that spit out a single straight jets of fire from beneath the ground or through the ceiling in intervals, and there are electric shockers attached to the ceilings and floors that occasionally shoot electrical beams left and right. There are also saws that move along the ground or are extending towards the playable character, as well as cylindrical grinders that move up and down. The iron balls on chains from Labyrinth Zone also appear here. In the first act, there are also special, vertical chambers. In these chambers are horizontal platforms that protrude from the right walls and slide along the depressions on the left. The player must properly maneuver between these platforms in order to not get crushed against them.

Various types of platforms appear in this Zone. First, there are the standard, floating platforms. The Zone also introduces the dropping platforms that appear here from time to time. These gimmicks have platforms that occasionally flip around and drop the playable character standing on them. The only way to stay on these platforms is to top jump while their platforms flip around and then land on them again when they stop flipping. The dropping platforms are also sometimes attached to moving chain loops, which stand still when moving towards the top of the chain loop, but will start spinning constantly once they move back towards the bottom of the chain loop. There are also disappearing platforms in the upper sections of this Zone, which the player can only jump on at the right moment. Some spots on the ground are also marked with red trapdoors that open from time to time and can throw the player into the lower sections of an Act or into a bottomless pit. This Zone also contains ground sections made of gray cubes that disintegrate upon contact with the playable character. Additionally, some passages in the level can only be opened with Switches.

The first two Acts of Scrap Brain Zone includes Conveyor Belts. Along these gimmicks, the player will sometimes encounter iron balls, saws and other obstacles. These Conveyor Belts can lead through tight corridors or through midair. In Act 1, there are also rotating disks inside walls with a recess in them that the player can enter. By entering them, the playable character will curl into their Spin Attack form and set themself inside the disk's recess while it turns around. The player can then leave this disk at different times when its recess aligns with a path out of it. In addition, Act 1 also makes use of tunnels. Act 2 on the other hand introduces new gameplay elements. The first one is the Flywheel which the player can stick to, run around, and jump off of at the right time to reach higher sections. There are also elevators here that can transport the playable character through tubes in the walls.

The first act takes place outside of the large factories that make up the Zone. There are also a couple of bottomless pits that the playable character can fall into if not careful as they make his way across the landscape of steel, flames, and electricity to the Goal Plate.

The second act has Sonic now inside one of the factories.

This act is relatively short. At the very beginning of this Act, there is a large platforms that will move down a sloping corridor when a Switch is pressed. If the player can overtake the platform before it reaches the end of the path and block the corridor, the player can shorten their way through the Act.

The Act ends with a climb between two iron ball and leads up to a red Springs that will take the player to the Final Zone.

In Sonic the Hedgehog (8-bit), Scrap Brain Zone appears as the fifth Zone in the game. Most obstacles remain intact, though the level design has been made from scratch.

In Sonic Drift, Scrap Brain Zone appears as one of the racing courses in the game.

In Sega Superstars Tennis, Scrap Brain Zone appears as an unlockable court. It looks very similar to how it did in Sonic the Hedgehog (16-bit), even having the Egg Crusher that appeared in Final Zone.

In the Sonic X comic series, Sonic, Amy, Knuckles, Rouge and Tails found their way through Scrap Brain Zone while trapped in a virtual reality world. There, the group managed to find and rescue Cream, Cheese and Vanilla.

In the Sonic the Hedgehog comic series published by Archie Comics, Scrap Brain Zone was a Zone formed by Dr. Eggman during Operation: Clean Sweep.

After the Super Genesis Wave re-wrote history, Scrap Brain Zone became a permanent part of Sonic's World, with a history virtually identical to its game counterpart. 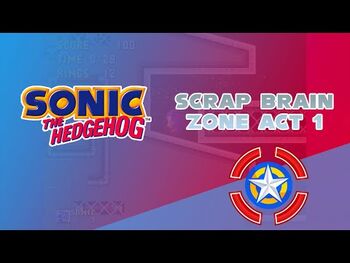 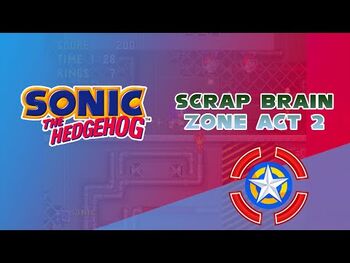 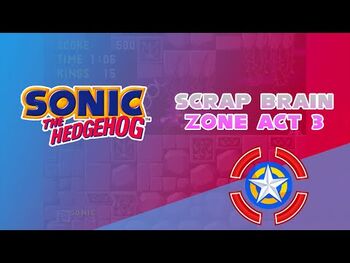