The Scepter of Darkness, from Sonic the Hedgehog (2006).

A scepter that glows in purple and white.

The Scepter of Darkness (闇の帳, Yami no Tobari?, lit. "Veil of Darkness") is an object that appears in the Sonic the Hedgehog series. It is a mysterious wand that once belonged to the Duke of Soleanna during the Solaris Project as an emergency measure. Its purpose is to seal Mephiles the Dark.

Not much is known about the Scepter of Darkness other than it is an ancient treasure that the royal family of Soleanna possessed.[1] Ten years ago, Mephiles the Dark was sealed by the time-traveling Shadow the Hedgehog inside the Scepter of Darkness, which was given to him by the dying Duke of Soleanna. However, he left it out in the open, citing that he "knows what will happen to it." It eventually came into the possession of Dr. Eggman and Rouge the Bat was sent to steal it from him under G.U.N.'s orders. Shadow (before he had travelled back in time) went to rescue Rouge and during their escape, Dr. Eggman attacked the duo in hopes of reclaiming the scepter. After a struggle between the three, the scepter was broken, which resulted in the release of Mephiles.

Some time later, Shadow and Rouge came across an archaeologist called Adrianna who was studying the scepter, and after saving her from an attack by Iblis' minions, she read to them an ancient text she discovered about the scepter and Mephiles, although she was unable to comprehend its meaning. After that, the two constructed a new scepter from the Candle of Darkness so that they could re-imprison Mephiles. Ultimately, however, this new scepter could not seal Mephiles and was destroyed in the attempt because he had grown too powerful from the Chaos Emeralds, combined with the present Mephiles absorbing the shade of Shadow when he was released.

In Sonic Runners, the Scepter of Darkness is mentioned on Mephiles the Dark's character profile. 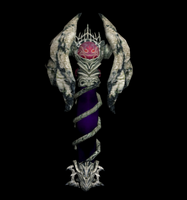 A model of the Scepter of Darkness