A Scarabesque, from Sonic the Hedgehog 4: Episode II.

A Dung Beetle type Badnik designed for use in desert areas. It can generate an infinite large boulders that explode while rolling. A troublesome enemy that is always there in undesirable places.

The Scarabesque[1] (スカラ[2], Sukara?, lit. "Scara") is an enemy that appears in the Sonic the Hedgehog series. It is a mass-produced, dung beetle-based Badnik model created by Dr. Eggman that roams Oil Desert Zone.

The Scarabesques' appearance is similar to that of a dung beetle. They have oval-shaped bodies, their heads and bodies coming together in an indistinguishable shape. They also possess purple elytron with stripes on them, and they have green underbellies. They also have six purple legs with gray joints where they connect to the Scarabesques' bodies and green shoe-like feet. Lastly, their heads, which are purple, have no mouths, two black eyes each, and a gray plate across their foreheads.

In Sonic the Hedgehog 4: Episode II, the Scarabesques appear as enemies. They are only encountered in Oil Desert Zone.

In gameplay, these Badniks can commonly be found perched in locations that do not work to the player's advantage, such as on high ledges. As their form of attack, they will push an endless barrage of explosives spheres designed after dung balls in the playable character's path. If these balls hit the playable character, they will take damage. Because of their placement and attack pattern, the Scarabesques are some of the more frustrating Badniks the player will encounter. Regardless, they are easily taken out with any attack. Also, upon their destruction, they will reward the player 100 points and release an Animal.

Scarabesques have the ability to manifest and deploy an endless supply of red and white bombs designed after dung balls, which they can send rolling in the direction of their enemies. 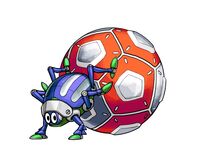