For the Town Stage/Village on the same continent, see Mazuri.

Savannah Citadel, from the Xbox 360/PlayStation 3 version of Sonic Unleashed.

A savannah with a sand citadel.

Savannah Citadel (クレイ・キャｯスル, Kurei Kyassuru?, lit. "Clay Castle") is the second Action Stage in the Xbox 360/PlayStation 3 version of Sonic Unleashed. It takes place in the area of an open savanna with an immensely large sandy citadel dominating the stage. It is located in the outskirts of Mazuri.

During the events of the game, Sonic the Hedgehog, Tails and Chip came here when looking for Professor Pickle and later when pursuing Dr. Eggman. In the Wii/PlayStation 2 version of Sonic Unleashed, Savannah Citadel only appears in the cutscenes and as a part of the Egg Beetle Boss Stage.

Savannah Citadel is based on various places and aspects from Africa. The stage's basic setting is a flat savanna. A dry environment, reddish-brown roads wind through the area, with patches of scrub grass on the roadsides and fences running along them. In a few places, there are also wooden stances with multicolored screens hanging over the road, sometimes forming tent-like tunnels.

In the open areas, there grow a few baobab trees outside the roads. There are as well some wild animals, like giraffes, standing just outside the roads as well. There are also a few buildings here made of sand and mud that resemble real-life mud houses from Timbuktu and Mali. While some look like regular Mazurian residences, there are also larger and more complex buildings resembling mosques. In the forest areas of the savanna, there grow larger baobab trees in enough numbers to cover up much of the roads' outsides. One tree in particular is as tall as a skyscraper and immensely wide with wooden roads winding between its branches.

Savannah Citadel is mostly dominated by a citadel-like building of sand and mud, which is presumably based off the Djinguereber Mosque and/or the Great Mosque of Djenné. This complex is at the size of a town and features stone-laid streets and alleys. Besides some trees, bushes and carpets, this citadel contains very little else. Also, at the end of the main nighttime act, Eggman's high-tech base can be seen in the background.

When Sonic the Werehog, Tails and Chip figured out that Professor Pickle was held captive by Dr. Eggman in Mazuri, the group traveled to Savannah Citadel where they found Pickle in Eggman's base. Despite the heroes coming to his rescue, Pickle was more concerned about the food he was fed. Regardless, Tails freed Pickle and convinced him to escape the base, but not before he had them retrieve the Gaia Manuscripts that Eggman had stolen from a vault, which held information on how to repair their shattered planet.

After saving Mazuri from Eggman, Sonic and Chip pursuing him to Savannah Citadel as the doctor headed for the Gaia Temple. Catching up to Eggman, Sonic destroyed his Egg Beetle, forcing Eggman to retreat. Sonic and Chip then found the Gaia Temple, where Chip accidentally made a pedestal appear with an innate ability. Realizing that the Chaos Emeralds fit into it, Sonic placed the powerless green Chaos Emerald there, resulting in the Emerald regaining its power and Mazuri's continent moving back into place. Tails soon after arrived at the Temple and showed them the good news on his Miles Electric. With their plan to restore the planet working, Sonic saw this adventure as a great opportunity to see the world.

In the nighttime acts, the player has to solve puzzles using Movable Crate and Levers to raise wooden platforms and open doors. The player also often has to cross bottomless pits by walking on thin bars in a tightrope fashion or by utilizing Horizontal Bars.

This act takes place in outskirts of Mazuri, and includes the majority of the Savannah Citadel environment. Here, the player first travels across the open savanna, and then has to make it through the mud citadel, before arriving in the surrounding forest where he/she has to climb a enormous tree at the end of the act, with the Goal Ring on top of it. It is in this act where Sonic and Chip are following Dr. Eggman, as they try to get to the Gaia Temple first.

This act takes place above the ground in Savannah Citadel, on a race course made of wooden plates in the treetops. Here, the player has to complete a total of three laps on this course within one minute and fifteen seconds, or end up losing a life and having to start over. The area outside the course is a bottomless pit, meaning falling off the wooden race course will cost the player a life. Additionally, the wooden roadway does not have any fences, meaning the player can easily walk over the edge and into the bottomless pit, either by accident or on purpose. The entire act is designed around the Sonic Drift maneuver, which is essential for the player to use if he/she wishes to complete the act in good time.

This act takes place entirely on the enormous tree at the end of the daytime act 1. Like near the end of the daytime act 1, the player has to lap around the tree in order to make to the Goal Ring. For this act, however, the course has been altered, having been given new and longer paths, such as additional Grind Rails and Springs, more enemies and more dangerous and hazardous obstacles, such as spikes. The entire gameplay is played in 2.5D.

This act, for the most part, takes place inside the Savannah Citadel's colossal citadel. There, the player has to enter the citadel and makes his/hers way through it to the other side. While progressing through the citadel, the player can to complete a number of puzzles with pushing stone blocks, pulling handles and raising platforms in order to proceed. At the end of the act, the player then has to defeat several waves of Egg Fighters in order to make the Goal Ring appear. It is in this act that Sonic the Werehog and his allies processes through in order to rescue Professor Pickle from his captivity in Eggman's base.

This act takes place in the treetops, far above ground. Here, the player has to make it through a network of balancing beam to different platforms, by walking across them in a tightrope walking fashion, without any means of grabbing onto the beams' edges. Falling off the beams means instant death. At the end of act, the player then has to defeat a Big Mother to make the Goal Ring appear.

The downloadable content pack for the Xbox 360/PlayStation 3 version of Sonic Unleashed, the "Mazuri Adventure Pack", introduced four additional daytime acts and two additional nighttime acts for Savannah Citadel to the game. These acts are basically extensions of the original acts in the game, but are much more difficult to complete. The pack was released on Xbox Live for $4.13 on 30 April 2009 and on the PlayStation Network for $3.00 on 7 May 2009.

This act is basically the same as the daytime Act 1 in the game, expect the act has been modified, having been given more enemies and more hazardous obstacles, such as normal spikes, bombs and spiked balls.

This act takes place in the same area as the daytime Act 3 in the game. Here, the player's objective is to collect 300 Rings while lapping around the tree, and get to the Goal Ring at the end of the course within two minutes. For this objective, the act has been modified with new paths and objects, such as springs, grind rails, and even trails of Rings for the Light Speed Dash, to allow better Ring collecting.

This act takes place within the Savannah Citadel's colossal citadel. A complex platforming act, the player here has to scale the walls with the Wall Jump to reach the Goal Ring high above, while avoiding flamethrowers on the walls and floating bombs. This act requires that the player has obtained the Wall Jump Shoes.

This act takes primarily takes on the same course where the Egg Beetle is fought. Here, the player has to complete three full laps on this course while avoiding bombs and confronting several chaser enemies that is encountered in the game; on first and third lap, the player is confronted by Aero Chasers, and on the second lap, the player is faced with the Interceptor. When sequencing from one lap to another, the player has to pass through some platforming sections in the middle of the course in order to enter the next lap.

This act takes place within the Savannah Citadel's enormous walls. This act is designed to utilize the player's skill with Sonic the Werehog's pole swinging ability. Here, the player has to travel across large bottomless pits, which compromises half of the act, by swinging from pole to pole and using platforms. The poles needed for the player to advance through the act are timed by a lever, which the player must use to make the poles come out, and will retract when time is up

This act takes place high up in the treetops of Mazuri. Here, the player has to make their way across the trees on wooden catwalks and floating platforms, while avoiding flying hammers and spiked poles that will send the player down into the bottomless pits beneath the catwalks. At the end of the act, the player then has to defeat two separate Titans, each accompanied by a swarm of enemies, before unlocking the Goal Ring.

The boss encountered in Savannah Citadel is the Egg Beetle, a giant arachnid-like mech piloted by Dr. Eggman. It is fought directly after the player clears the daytime Savannah Citadel Act 1 in the Xbox 360/PlayStation 3 version of Sonic Unleashed, and can be fought after unlocking the Boss Stage in Mazuri's Gaia Gate in the Wii/PlayStation 2 version of the game. For this boss battle, the player controls Sonic the Hedgehog.

During this boss battle, the Egg Beetle will drop harmful objects on the ground for the player to run into (boxes on the Wii/PlayStation 2 version and spiked balls on the Xbox 360/PlayStation 3 version), fire missiles and try to crush Sonic with its flaming pinchers. At some points during the battle, the perspective will switch from 3D to 2.5D, where the Egg Beetle will attack from the side. To defeat the Egg Beetle, the player has to avoid its attacks and attack its cockpit when vulnerable, either with the Homing Attack or the Sonic Boost.

Nearly all Acts in Savannah Citadel contain a number of collectibles the player can obtain when playing through them:

In the Sonic the Hedgehog comic series and its spin-offs published by Archie Comics, Savannah Citadel is referred to as Savannah Citadel Zone. In this media, it is a region of Sonic's World found in Efrika. 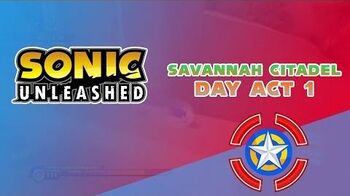 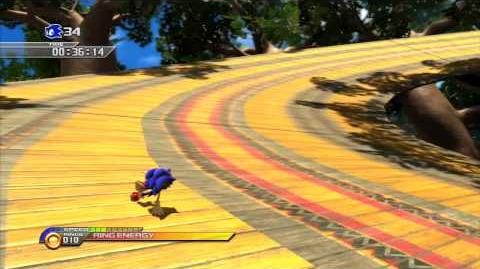 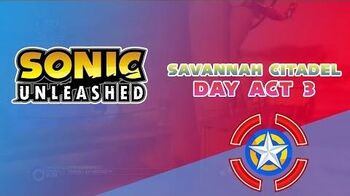 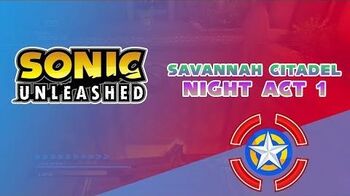 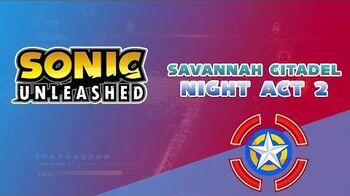