"Sandworm" redirects here. For other enemies with the same name, see Sandworm (disambiguation). For the Badnik also known by the Japanese name "Nal", see Caterkiller.

A Sandworm, from the Wii U version of Sonic Lost World.

Sandworm[1] (ナール[2], Nāru?, lit. "Nal") is an enemy that appears in the Sonic the Hedgehog series. It is a mass-produced, caterpillar-based Badnik model created by Dr. Eggman, and one of the successors to the Caterkillers.

The classic Sandworms are similar in appearance to the Caterkiller. Resembling real-life caterpillars, they have long bodies made up of spherical segments. Most of the Sandworms' body segments are blue with gray underbellies and curved yellow spikes on the sides, except for their heads, which features cartoony black eyes, yellow jaw joints, yellow antennae with bulbs, and a mouth each with a few sharp teeth.

In Sonic Colors and Sonic Generations, the Sandworms received an updated, more detailed design that included cyan eyes and the spikes on their body segments having been replaced with metallic hatches. In Sonic Lost World, the Sandworms returned to their original design, but with cyan eyes. In Sonic Forces, the Sandworms received a more modernized and militaristic design. This time around, they were little more than segmented white cables with red and black circuitry inside them. Also, instead of heads, they had laser guns and a white cap for a hat.

The size of the Sandworms has varied over the course of their history. Originally, they were about the same size as the original Caterkillers. In Sonic Lost World however, they were about five times larger than Sonic. The amount of their body segments has also varied; in Sonic & Knuckles, they had six body segments, in Sonic Colors and Sonic Generations they had five, and in Sonic Lost World they only had four.

Sandworms first appeared as enemies in Sonic & Knuckles and the lock-on game Sonic the Hedgehog 3 & Knuckles. In this game, they are only found in Sandopolis Zone. In gameplay, they sneak below the surfaces of quicksand. The displaced sand can be seen above them, creating a sort of ripple effect that shows roughly where they are. After a few seconds, they will stop and jump out of the sand in an arcing trajectory to another point in the sand. The player should be particularly wary about falling off platforms over quicksand pools since there is usually a pair of Sandworms hiding in them. If the player gets damaged while in quicksand, it can become impossible to jump out, sometimes costing the player a life.

The Sandworms are best fought whilst they are in the air, but it is difficult to do so, especially when two of them jump out at the same time. The player can defeat a Sandworm by hitting its head with a Spin Jump as the rest of its body is covered in spikes that will harm the player if touched. Also, upon a Sandworm's destruction, an Animal will be released from it.

In gameplay, Sandworms hide within small stationary hatches. When the player gets close however, they will pop out and start firing relentless energy projectiles at the player. In most cases, they are best defeated with a Homing Attack.

In the console/PC version of Sonic Generations, Sandworms from somewhere across spacetime appear as enemies in both Acts of Planet Wisp. In this game, they retain their design from Sonic Colors.

In gameplay, the Sandworms' attack patters are the same as in Sonic Colors: they hide beneath stationary hatches, but will pop out and shoot energy projectiles at the playable character when they get close. Also, in the Statue Room, the player can unlock a statue of the Sandworm.

In the Wii U version, PC version and Nintendo 3DS version of Sonic Lost World, the Sandworms appear as enemies. During the games' events, the Deadly Six hijacked all of Dr. Eggman's Sandworms after the group betrayed Eggman. In these games, giant Sandworms are encountered in the Zones. However, they have different attack patterns for each version of the game. In addition, their design resemble the one from their debut game.

In the Wii U/PC version, Sandworms are only found in Sky Road Zone 1. In gameplay, their attack patterns simply involve them crawling forward. When fighting one, the player should hit its head using a Focused Homing Attack in order to destroy it, which will in turn release the Animals inside it. Attacking any other body segment will not award the player with points and cause the Sandworm to dismember its body without releasing its Animals.

In the Nintendo 3DS version, Sandworms appear in Windy Hill Tutorial and Windy Hill Zone 1 and 2. In gameplay, they pop out from stationary hatches and will sometimes contain Springs or other objects within their body segments that can be used after the Sandworms are defeated. While they can be avoided, it is occasionally mandatory to defeat them in order to progress through a Zone. In such cases, the player must attack their heads with the Homing Attack multiple times. When a Sandworm's antennae sparkles, it will smash its head at the player, creating a short-ranged shockwave. However, this will leave it dizzy and open to the player's attacks. Also, upon destroying a Sandworm in this version of the game, it will release three Animals.

In Sonic Forces, the Sandworms appeared again as enemies. In this game, they sport a drastically different and modernized militaristic redesign. The player only encounters them in Capital City.

In gameplay, the Sandworms possess the same attack patterns they had in Sonic Colors and Sonic Generations: they hide beneath hatches, but will pop out and shoot energy projectiles at the player when they get close. In addition, there is a rare variant of the Sandworm in this game that will shoot flames like a flamethrower instead of energy projectiles.

In Team Sonic Racing, the Sandworms appear as obstacles. In this game, they sport their design from Sonic Colors. The player only encounters them in Sand Road.

In gameplay, the Sandworms are encountered near the end of Sand Road's lap; they hide beneath the sand, but will pop out if a racer gets too close. If a racer hits one, they will take damage and spin out. However, they can be destroyed with Wisp power-ups or Power-Type characters without the player taking damage.

The Sandworms are efficient burrowers, capable of digging through the ground and moving through quicksand as it is water, and possess a harmful bite. Later generations of Sandworms were equipped with laser cannons that can shoot energy projectiles and could detach their spiked body segments from each other with ease. The giant versions of Sandworms also possess impressive strength.

In the Sonic the Comic series published by Fleetway Editions, the Sandworms are a part of Robotnik's Badnik army. Depending on the artist, the Sandworms' appearance would be different for each issue.

Jazwares made several figures of characters from the Sonic franchise due to the announcement of Sonic Generations. There was a Modern Tails figure packaged along with a blue/gray Sandworm figure. 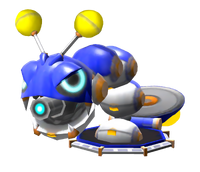 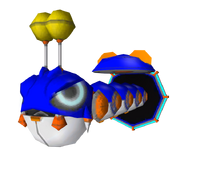