Sand Shower Zone was the name given to a desert Zone intended to be featured in Sonic the Hedgehog 2 for the Sega Mega Drive.

Sand Shower Zone is a desert, decorated with cacti and assorted plants. The tiles were designed to at some point be used in a winter-themed stage, transforming the sand into snow and the cacti into Christmas trees. The player would navigate terrain both aboveground and belowground, where there were snow/sand tunnels.[1]

Sand Shower Zone was created by Brenda Ross,[1] one of the final level artists added to the Sonic the Hedgehog 2 development team. It was referred to in an early concept sketch as Sabaku Zone (literally "Desert Zone"). Time constraints kept the Zone from being added to the final product. 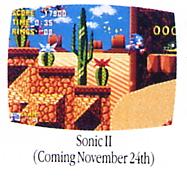 From a November/December 1992 issue of Sears, Roebuck and Co. Magazine