Sonic News Network
Register
Don't have an account?
Sign In
Advertisement
in: Sonic and the Secret Rings bosses, Villains

Sand Scorpion is the first boss in Sonic and the Secret Rings in the Sand Oasis. It appears from a quicksand pit before Sonic the Hedgehog battles it. It was created by Erazor Djinn.

Sand Scorpion is a giant purple scorpion. It has fifteen red eyes: five on its two stingers, nine on its back (which are almost hidden by its sides), and one large eye on its head. It also has red marks on its stingers and purple and red legs, torso and eyelids.

After Sonic and Shahra find King Shahryar, who is then kidnapped after a brief talk, or after they meet Ali Baba, they visit an area filled with sand. Suddenly, they find a giant scorpion, summoned within a quicksand pit by Erazor. Before Sonic fights the Sand Scorpion, Sonic makes a promise to Shahra that he will defeat the monster, even without Shahra's powers.

Once the scorpion is killed, the Yellow World Ring is obtained.

The Sand Scorpion's attacks include throwing a barrage of bombs at Sonic, stabbing him with one of its pincers, and slamming one of its pincers onto him. All of these attacks can be avoided by stopping suddenly. Performing a Homing Attack on one of its pincers after a stab or slam allows Sonic to use the eyes on its stingers to reach its largest eye, its primary weak point.

After three Homing Attacks to its eye, the Sand Scorpion turns around and unleashes a new weak spot: an eye concealed within a large mouth. Sonic will have to attack this eye repeatedly to inflict damage. After five hits on that eye, all of the Scorpion's eyes turn black and the creature collapses, screaming with its last breath. This will give Sonic the Yellow World Ring. 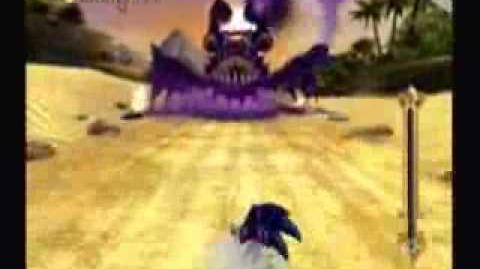 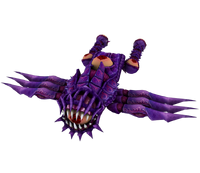