Sand Road[1] is a race track that appears in Team Sonic Racing. It is based off Sand Hill and Sandopolis Zone.[1]

Sand Road takes place in the middle of the Sandopolis, a desert region on Angel Island. The entire track is a dry, sandy road. The track also features medium-sized flat buildings and sculptures of echidnas. Along the sandstone walls are sheets of cloth which are sat up on the buildings. An oasis can as well be found at the end of the track. In the background of this track, one can also see numerous sand dunes and the artificial pyramids of Dr. Eggman's whose peaks are disconnected from the rest of their structures and float in midair. Several grandstands can also be found along the track which have a multitude of cheering Chao on them.

Sandworms can also be found along the track, which will pop out from under the sand as the racers approach them. These enemies can be destroyed with Wisp power-ups or Power-Type characters. If anyone else besides a Power-Type character collides with a Sandworm, they will take damage and spin out temporarily.

When the race begins, the road will start out as a straight path. However, on the left and right side of this road, and in a certain spot in the middle of the road, there is speed-reducing moving sand. In case the Technique-Type characters decide to take a shortcut over these sands, the player has to watch out for stone markers. Eventually, at the end of this straight path, the road takes a sharp turn to the right, before then making a sharp turn to the left. Following the leftward turn, the player will arrive at a broken wooden bridge. Upon hitting the edge of this broken bridge, the player will be flung across the gap and land on the other side. Immediately after landing on the other side, the road takes a turn to the left. After the swing, the road splits into three different roads that run side by side and rise and fall at various points, with the tallest bumps in the road being on the right side and the lowest bumps being on the left side.

After getting through the section with the rising and falling roads, the player can follow the main road and eventually be forced to take a sharp turn to the left. However, the player can also take a shortcut through a canyon by taking the leftward route that splits off from the main road before it turns to the left. Should the player take this shortcut, they will have to watch out for stone markers. If the player does take the shortcut, they will have to make a sharp turn to the left before going off a ramp that will take them back to the main road. Within this section, Sandworms will pop out of the ground. In addition, there are three possible paths within this section that the racers can take. All the characters can either take the routes on the left or right side of this section, which run along the canyon walls. The third route on the other hand is more suited for Technique-Type characters, as it leads through two oases with speed-reducing grass and lake water.

After crossing the section with the three routes, the player will enter a sharp swing to the right which leads straight to the finish line. While making it through this swing however, the player has to watch out for moving sand patches on the sides of the road and stone markers.

Sand Road also has its own mirror image version of it where the left and right sides are interchanged. 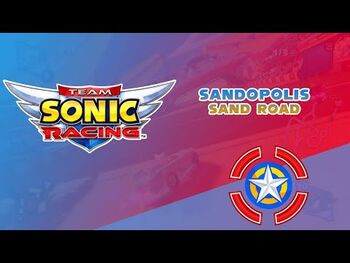