The Samurai Blade resembles a typical single-edge Katana. Its blade is about two meters long and colored silver, and its grip is colored yellow and black.

The Samurai Blade is a very strong weapon, but it has the least amount of ammo out of all the unlockable weapons in the game, only having three attacks before being upgraded and six attacks after. When upgraded, however, if swung when out of the reach of an opponent, it will send out a shock wave, harming any enemies in its path without using any ammo.

To unlock this weapon, one must complete one of the missions of GUN Fortress in Story Mode. To get the upgraded version, the player must complete the opposite mission for the same stage. 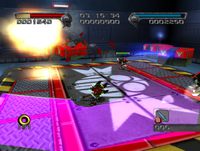 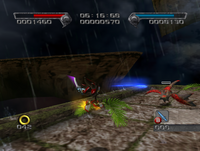