Template:Character Princess Sally is one of the main characters in the Sonic the Hedgehog animated series. She is the daughter of the King, and the heir to the throne as the future ruler of Mobius. When Dr. Robotnik rose to power, Sally and the other children were send to Knothole Village for safety. Here, she became one of the Knothole Freedom Fighters and worked together with her friend over the next ten years at overthrowing Robotnik's tyranny.

An early design of Sally were featured in an article in Sonic the Poster Mag #1 that announced a new animated series starring Sonic the Hedgehog. Within the four pages of plot synopsis and concept art, a group of screen shots that greatly differ from the rest appear without explanation. These screen shots include a character named "Princess Acorn", a Mobian (presumably a squirrel) with yellow fur and blond hair wearing a red dress. She shows up alongside characters that have since been featured in Sonic the Comic. This character, however, shares few similarities with Sally's final appearance.

Sally was born into the Royal Family and was the heir to the throne. Becoming overwhelmed with these responsibilities left her isolated and sheltered from the outside. She befriended Sonic the Hedgehog during an arranged play date by Sonic's Uncle Chuck.

Following Dr. Robotnik's coup, Sally and the other children escaped Robotnik's force by fleeing to Knothole Village, but her father was imprisoned by Dr. Robotnik. While living in Knothole, Sally became one of the village's Freedom Fighters, serving as the group's strategist and de facto leader. She also became the surrogate aunt of Tails where she becomes overprotective of his safety. Over the next ten years, she and her friends then worked together to fight back and overthrow Robotnik's rule.

Sally is smart, confident, deliberate, and mature. She is likewise strong-minded, logical and focused, preferring to plan ahead of situations, while having a loving devotion to her people and friends. Her attitude stems from childhood due to a strict upbringing of learning etiquette, royal studies, and the family credo. Most of the time, she prides herself on her intellect and leadership skills. Whenever she feels stressed out, she consults Bunnie to balance her frustrations.

Sally's friendship with Sonic is a conflicting one, since Sonic antagonizes Sally due to her "slowness" while she tries to improve his mannerisms. Sonic was often an endless source of neuroses for Sally, who could be very sardonic and confrontational with his impulsive attitude contrasting her extremely meticulous and no nonsense one. In the first season, this was sometimes played against her, leading her to self righteously rival Sonic's planning and sometimes cause problems in her bull headedness. Her personality is calmed a little in the Second Season however, where she is usually portrayed as more level headed and tactful than he is, and often required to bail him out when his recklessness gets him into trouble. Despite their constant bickering, however, they do best as a team.

In spite of being a princess and proud of her title and heritage, Sally is very down-to-Earth and dislikes being treated any differently from the rest of her friends.

Artwork of Sally from SegaWorld Sydney. 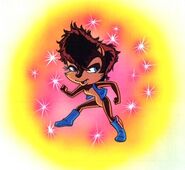 Retrieved from "https://sonic.fandom.com/wiki/Sally_(SatAM)?oldid=1136333"
Community content is available under CC-BY-SA unless otherwise noted.