Sonic News Network
Register
Don't have an account?
Sign In
Advertisement
in: Adventures of Sonic the Hedgehog characters, Princesses, Squirrels and chipmunks, Mobians

Sally (Adventures of Sonic the Hedgehog)

For over a year, Sally had been Sonic's girlfriend. One year before the events of "Sonic Christmas Blast", she and Sonic agreed not to give each other presents for Christmas. Despite their agreement, Sally still gave Sonic the Ring of Ultimate Velocity among many other gifts. This caused Sonic to feel very guilty about not getting her anything.[1]

One year later, on Christmas, Sally and Sonic agreed to once again not give each other presents. Before Sally could say anything else, however, Sonic took off with Tails. On Christmas morning, Sally was waiting when Sonic arrived, having just saved Christmas with the Ring of Ultimate Velocity. Sally was then buried in presents and Sonic explained that despite their promise, the ring she gave him came in handy. As Sally resurfaced, Sonic held up some mistletoe and gave her a kiss before he took off.[1] 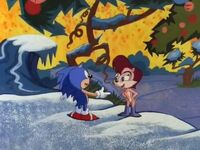 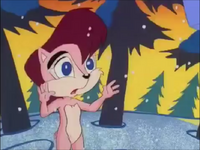