Rouge next to a Safe.

Safes are large rectangular doors with locks and the GUN logo on them. Each are aligned with different different colors which be either red, yellow or blue.

The Safes are only found in Security Hall. In gameplay, they are similar to the Pipe, as they hide usable objects behind their doors like the Chaos Emeralds. To unlock a Safe, the player must find their appointed Ball Switch and activate it. The player must then Climb up to the GUN logo on the Safe, where they must Dig into it to open the Safe's doors and unlock the object behind it. However, if GUN's Logo does not appear on the Safe, then the player can only open it after finding its Ball Switch. 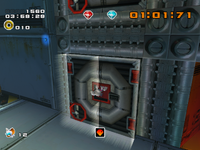 Rouge digging into a safe.
Add a photo to this gallery