An improved version of the SS Marine.

After Marine destroyed her old waterbike, the SS Marine, she sought to create a new watercraft, as she had a burning desire to explore her world. Rather than claiming one of Tails' watercraft that he made during the course of the adventure, Marine instead wanted a ship she had made on her own.

As such, Marine began working on the SS Super-Marine on her own, without Sonic or Tails knowing about it. It probably used the superior Materials that had been discovered throughout the game. Finally, after several days of work, Marine finished the SS Super-Marine and it proved itself to be a much greater success than the SS Marine. Marine used it later near the end of Sonic Rush Adventure, to catch up with Sonic and Tails in the SS Tornado EX so that she could say goodbye to her friends, before they returned to their own world.

Marine and the SS Super-Marine shown in the end of Sonic Rush Adventure. 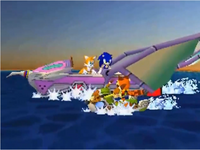