Ergo, another repercussion of your hasty actions.

SA-55[1][2] is a character that appears in the Sonic the Hedgehog series. It was a robot built by Dr. Eggman, who assisted him during the Dark Gaia incident. The precursor to Orbot,[1] SA-55 is very similar to his successor in appearance, and might have been an early prototype of him.[3]

SA-55 is a diminutive robot with a round head composed of a semispherical white cap with a smaller black semisphere under it for a lower face. Its lower face can separate to reveal a cover, representing its mouth, and it has two grey-framed and pupil-less eyes. It also has a ball joint for a chest and red gloves for hands. Its arms and back consist each of two thin bars that are joined by a ball joint. Its lower body is a small semisphere with a gray inside and a ball joint connecting it to its back. It also has pink eyes and mouth, while the rest of its body is pretty much all-black with a few white joints.

In the Xbox 360/PlayStation 3 version of Sonic Unleashed, SA-55 assisted Eggman in his plan to use the power of Dark Gaia, which had scattered around the world when Eggman awoke it, to construct Eggmanland. It oversaw this process, doing the mechanical processes involved and relaying information of the plan's progress. When Eggman deployed his Egg Cauldron to take of Sonic in the Tornado-1, SA-55 warned Eggman that it was incomplete and to handle it gently, but was ignored.

SA-55 later accompanied Eggman on his trip to Mazuri to secure a Gaia Temple. There, it laughed at Eggman when it was pegged in the face by a rock thrown by Kwod before it was shut up by the doctor. When Sonic came to the villagers' rescue soon after, SA-55 escaped with Eggman.

Back at Eggman's base, SA-55 presented Eggman with his dinner and reported that his plans were behind schedule, which SA-55 constantly noted was the doctor's own fault while pointing out the undesired results of his hasty actions. As Eggman contemplated on how to gather Dark Gaia's pieces, SA-55 gave its suggestions, but was brushed aside when Eggman had the idea of attracting them with an energy pulse. As Eggman's plan proved to be successful, SA-55 commenced Project Dark Gaia upon Eggman's clearance.

Later on, SA-55 was in Eggman's Egg Mobile with Eggman as the doctor was defeated by Sonic in the Egg Dragoon and then knocked into the horizon by Dark Gaia when the beast appeared. Landing in a rocky region as Sonic and Chip defeated Dark Gaia and thwarted Eggman's plans, SA-55 suggested to Eggman that he could begin anew as it listed all the ways the doctor's plans had failed, making Eggman snap and try to kick it. SA-55, however, dodged the kick and ran off with the doctor chasing after it.

SA-55's personality is rather artificial, being stiff and mechanical in behavior and speech. With delivery lines as dry as its wit,[1] and a rather sassy demeanor, it is utterly, comically tactless. Even more so, it displays an open lack of respect and invective language; it laughs openly at Dr. Eggman's physical misfortune and directly insults Eggman with snarky comments and sarcastic remarks at the doctor's expense.

SA-55 can retract its body into a travel-sized sphere.

"Your skill at self-aggrandizement is unparalleled."
—SA-55 claps after insulting Eggman before getting slapped, Sonic Unleashed.

"You can simply begin your plans anew. Even if all of your efforts this last time were utterly wasted. Even if it was a complete and humiliating loss. Even the most pathetic loser in all the world will surely have his chance to--"
—SA-55 mocking Eggman's defeat before getting interrupted, Sonic Unleashed. 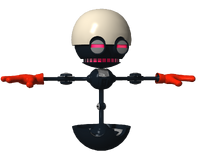