Ryo Hazuki (芭月 涼, Hazuki Ryō?) is the main protagonist of the Shenmue series. He is a Japanese teenager who lives in Yamanose, Yokosuka and dropped out of high school to avenge his father Iwao Hazuki's murder. He has appeared in several of the same games as Sonic the Hedgehog.

Ryo appears as a playable character in Sonic & Sega All-Stars Racing, where he drives his friends motorcycle. He has also borrowed a Forklift Truck from his job which he can use with his All-Star move "Working Man". Ryo can actual have the forklift for an alternative vehicle, for those who preordered the game, but can be purchased for 320

Ryo appears as a playable character in Sonic & All-Stars Racing Transformed, as purchasable DLC for the Steam release. His signature vehicle is an OutRun arcade cabinet, which can transform into the Hang-On and Space Harrier cabinets for the water and air respectively.

At the young age of seven, Ryo was quite bratty. As Ryo got older, he became quite shy around girls after being teased for liking one by a friend. 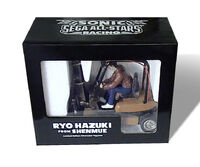