"Running Out of Time"

"Running Out of Time" is the fiftieth episode of the anime series, Sonic X. It first aired on 14 March 2004 and 19 March 2005 in Japan and the United States respectively.

On the morning news the President reports about the merging planets and spending the last day with Sonic and the others until they return to their home world. Outside, Chris meets Sonic at the swimming pool who asks if he would like to go for a run with him. Tails and Chuck are working on a machine to initiate Chaos Control to send Sonic and the rest back.

At school, Chris and the others know what's happening until an army of flying robots start invading Station Square. An army colonel, Card Passer has, against the President's will, sent the robots after Doctor Eggman. Dr. Eggman is now under attack, when Sonic arrived and attempted to save Eggman. Sonic destroys some of the robots attacking them as they run through a door on a small tower which then lifts up and turns into Eggman's newest flying fortress, the Grand Egg Imperial

Eggman handles the robots himself with his flying fortress, and the doctor, telling Sonic he told him he did not need his help, gives him a small box with a computer microchip inside since he tried to save him. Meanwhile Rouge, Knuckles and Topaz went to rescue the President from an army of agents. Sonic went back to the lab and gives the microchip to Tails and Chuck which turns out to be the last part they need for the Chaos Control machine.

That evening, Chris got ready to say goodbye but he feels sad. Everyone had left the mansion and had gone to the portal. Tails and Chuck start up the portal but it stopped working. Sonic gives them the Emerald he found and they start it back up. Eggman, Decoe, Bocoe, and Bokkun in the fortress, along with all the other creatures that came through from Sonic's world, go through the portal, but it stopped working again. Tails didn't want to give up and Chuck says that they have to adjust a few things. Just then, Sam arrives and before he gets out of his racing car he drives away quickly, wondering if he could step down since he no longer has any real challengers. Everyone had a little laugh but Chris didn't. Tails works on the portal and manages to get energy from Space Colony ARK and starts it back up.

Everybody said goodbye as Chris feels worried. Meanwhile Scarlet and Mr. Stewart looked at the energy and Scarlet wonders what Mr. Stewart is and Mr. Stewart says that she will have to keep investigating. Chuck tells everyone that they can't keep the gate open long and demands them to leave before a power failure occurs. Amy, Cream, Cheese, Vanilla, Tails, Rouge, and Knuckles leave now, and as Sonic is about to leave, Chris says goodbye to him (but his mind doesn't think so). Just as Sonic is about to step through the portal, Chris runs over and shuts it down. 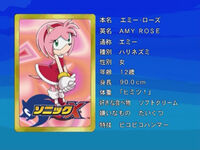 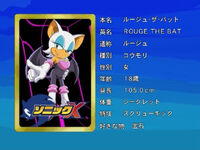 Rouge the Bat
Add a photo to this gallery