Sonic the Hedgehog #250 (only appearance)

Rouge Woman is a character that appears exclusively in the Sonic & Mega Man: Worlds Collide crossover event. She was the Roboticized Master form of Rouge the Bat.

Rouge Woman mostly resembled her organic form, though with obvious Robot Master qualities. Her head became helmet-like with her ears transforming into a pair of fins that rested on top of her head. Her muzzle became flattened, and her eyes became mechanical sensors with green irises on black "sclera." Her gloves and boots became part of her limbs, with her left arm transforming into the cannon from which she launched her black wave attack. She had white armor on her upper torso with a pink heart on the front, while her lower torso and upper legs were black like her organic self's outfit.

After Rouge the Bat's sabotage of the Wily Egg she was captured and transformed into Rouge Woman.[1] Rouge Woman then led the Robot Master Army against Sonic the Hedgehog, Mega Man, and their various friends and allies. After participating in the battle for a short time, she was grabbed by Sonic, which surprised her long enough for Mega Man to hit her with his Sonic Shot, which restored her to her organic form.[2]

Rouge Woman's Master Weapon was the Black Wave, which could briefly stun enemies with its power. It was a pink orb-like blast that produced growing and then disappearing purple rings behind it as it shot forward.[2] 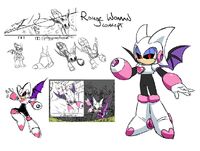 Concept artwork of Rouge Woman, from Ben Bates.
Add a photo to this gallery