Rotatatron, from the Wii version of Sonic Colors.

Fine. You're so smart, robot. YOU take care of this mess! Release the Big Boy! At least I know he won't screw it up.

Rotatatron[1] (フラワン[2], Furawan?, lit. "Flowan"), also known as the Big Boy,[3] is a character that appears in the Sonic the Hedgehog series. It was a giant robot created by Dr. Eggman. During the Wisp incident, it would engage Sonic the Hedgehog, only to be destroyed. Notably, a piece of it would also contribute to the destruction of Dr. Eggman's Incredible Interstellar Amusement Park.

Rotatatron resembles a large mechanical monstrosity with a red-colored body. It has a large yellow eye (its weakness) with a cyan iris. Its face plate has two sets of four triangular covers (each colored blue and magenta), which resembles a stylized sun when opened. Rotataron also has a pair of hands connected by a grey appendage. Each of its hands is armed with razor-sharp claws.

In the Wii version of Sonic Colors, and its remaster Sonic Colors: Ultimate, after Sonic discovered Dr. Eggman was capturing Wisps for his own evil deeds, Eggman unleashed Rotatatron to stop Sonic. However, Rotatatron was ultimately demolished by Sonic. When destroyed however, a part of Rotatatron's arm got lodged into a part of Dr. Eggman's Incredible Interstellar Amusement Park, which causes Eggman's giant mind control cannon to backfire when Eggman activated it.

In Mario & Sonic at the Sochi 2014 Olympic Winter Games, Rotatatron appears as a boss incorporated into the routine in Sonic's Figure Skating Spectacular Dream Event, which is set in a ice rink setting similar to Tropical Resort. During this event, each of the four characters participating in the event must near Rotatatron and carefully time a jump in order to hit its eye. This cycle will then repeat, except this time, Rotatatron shoots red shurikens at the player(s). After enough hits have been dealt, the four characters skate out into the center of the rink. Once in position, the player(s) must spin in order to perform the Final Color Blaster with the aid of the Wisps collected over the course of the event, and deal Rotatatron the final blow.

Rotatatron, like most of Eggman's robotic creations, is exceptionally powerful. It uses its claws for close-ranged attacks and can launch pink energy discs for a ranged attack.

Refreshinator is an upgraded variant of the Rotatatron. This model is even more deadly and durable than Rotatatron, possessing the ability to fire lasers and release electrical impulses through its frame. It first appeared in the Wii version of Sonic Colors.

A mechanical, one-eyed monstrosity that grapples a wheel.

The Rotatatron fight is simple and the boss itself requires only three hits at most to be defeated. The skirmish takes place inside of a large wheel where plaforms move around. Here, Rotatatron will grabs various parts of the main wheel with its arms and change its position. It will also fire red spiked disks at the player that spin around the arena. Throughout the fight, Rotatatron's weak point is its eye. To get to it, the player has to jump across the platforms and then hit the eye with a Spin Jump or Homing Attack when it is open. On one of the platforms there is also a Wisp Capsule with a Cyan Wisp inside. By using the Cyan Laser it grants, the player can attack Rotatatron's eye or hand, dealing twice the damage against the Rotatatron compared to the Homing Attack. In the event of an attack on Rotatatron's hand, the Cyan Laser will pass along it like a beam of energy and strike the eye. After receiving three hits, Rotatatron will start releasing Rings before exploding.

In Sonic Colors: Ultimate, beating Rotatatron in under three hits unlocks the achievement, "Handing Out Shiners".

Achieving an S-Rank in this battle might depend on quick usage of the Cyan Laser. 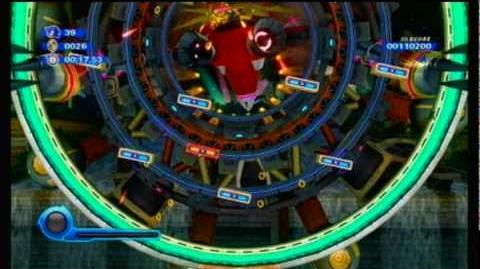 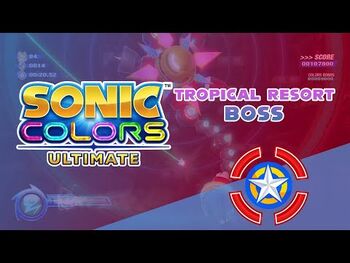 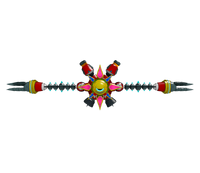