Sonic News Network
Register
Don't have an account?
Sign In
Advertisement
in: Sonic the Hedgehog 4: Episode II, Attacks and moves

For other uses of the term, see Rolling Combo (disambiguation).

The Rolling Combo (ローリングコンビネーション, Rōringukonbinēshon?, lit. "Rolling Combination") is a move that appears in Sonic the Hedgehog 4: Episode II. It is a Tag Action performed by Sonic the Hedgehog and Miles "Tails" Prower where the two of them join together to perform a larger and much stronger Spin Attack/Spin Dash.

When using the Rolling Combo, Sonic and Tails join hands in a flash of light and form a combined Spin Attack resembling a yin-yang formation which works similar to the Spin Dash. This Tag Action is performed by pressing

/tapping the Tag Action button while on the ground, as pressing it in the air will activate Copter Combo/Submarine Combo. This move is unlocked during Act 3 of Sylvania Castle Zone.

/tapping the Tag Action Button.This move is powerful enough to destroy any enemy it hits and large obstacles like pillars. While doing the Rolling Combo, the users are immune to almost every environmental hazard, except for electricity and boss attacks.

The Rolling Combo can also be used to dig tunnels as seen in White Park Zone Act 1, where there are some deep snow sections that can only be passed with the Rolling Combo.

In the Sonic the Hedgehog comic series and its spin-offs published by Archie Comics, the Rolling Combo is a collaboration technique used by Sonic and Tails both before and after the events of Sonic & Mega Man: Worlds Collide.

In the Sonic the Hedgehog comic series and its spin-offs published by IDW Publishing, the Rolling Combo is a collaboration technique used by Sonic and Tails. 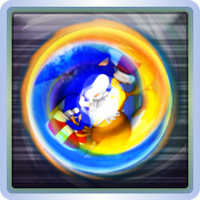