Rogue's Landing before a race

Rogue's Landing is a track that appears in Sonic & All-Stars Racing Transformed, representing Skies of Arcadia. It is also the home course of Vyse.

The setting for Rogue's Landing is at sunset, at an island haven where the Blue Rogues meet and trade. However, the Valuan Armada has arrived at the islands to attack the Blue Rogues, firing cannonballs at the track and destroying it in the process. The first lap has the Valuan Armada ships flying to the island, preparing to fire. The second lap has them firing at the town below them, destroying the surrounding buildings and even the track, with some ships being shot down in the process. By the time the racers reach the final lap, the Blue Rogues mobilize as they take on the Valuan Empire and as a result of the ferocious air battle, the entire track is in ruins, meaning the racers have to take to the skies for the remainder of the race. In this part, the racers weave through air mines littered throughout the course, while following the Delphinus, Vyse's ship.

Skies of Arcadia fans can expect to find ships and other features like the Delphinus, the Lynx, the Hydra, the Albatross, Rhaknam the arcwhale and Pirate Island. Moonstone showers can also be seen falling by the Silver Moon.

The pre-race flyover for this course is accompanied by a remix of Skies of Arcadia's intro theme. 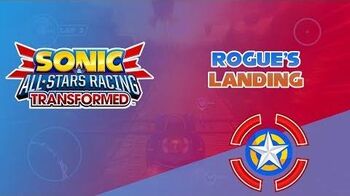