The Rocky (ロッキー, Rokkī?) is a creature that appears in the Sonic X anime series and its comic series published by Archie Comics which first debuted in "Defective Detectives". They are a race of non-anthropomorphic seals native to Sonic the Hedgehog's world.

The typical Rocky is a diminutive form of seal, although it resembles more a pinniped. They have grey-whitish skin/fur with rotund heads, two large blue eyes, small triangular flippers, and a fin-like hind flipper each. They each also have a fussy white muzzle reminiscing a mustache and a small black nose.

Although recognized as animal life, the Rockies are remarkably intelligent and sociable, having been shown to live in civilized environments and reside in their own houses.[1][2]

As a result of the effects of Chaos Control, several Rockies and other creatures got sent to Earth, raising worries about whether they would be able to coexist with humanity.[1] Eventually though, they got sent back to their home world.[3] However, it was not long before Dr. Eggman returned to threaten the Rockies with his plans to take over their world.[2]

A number of virtual Rockies appeared in a simulation Dr. Eggman trapped Sonic the Hedgehog and his allies in. These Rockies would appear whenever Sonic and his friends freed them from badniks or capsule prisons.[4][5] 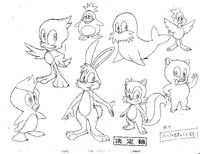