Rock Throwing Combatant - Picks up rocks and throws them since he has no weapon.

Rock Throwing Combatants[3] (投石戦闘員[2], Touseki Sentouin?) are enemies that appear in the Sonic the Hedgehog series. They are anthropomorphic avian foot soldiers of the Battle Kukku Empire. While the standard troopers just throws rocks at enemies, many Rock Throwing Combatants also pilot different types of weapons and vehicles.

Rock Throwing Combatants are small anthropomorphic birds about the same size as Miles "Tails" Prower. They have large and sharp orange beaks and feet and a white plumage. Their large heads are covered by dark blue helmets shaped like a shark fin and black goggles, and they wear red jackets.

In Tails Adventure, the Rock Throwing Combatants appear as enemies. They are only encountered in Polly Mountain 1.

IN gameplay, the Rock Throwing Combatants are usually standing in stationary positions on rough terrains or cliffs, while tossing small rocks towards Tails as he climbs the mountain. As stationary enemies, they can easily be taken down with one hit from any type of offensive item in the game. Rock Throwing Combatants are also usually piloting different types of machines or weapons. Many of them are also seen piloting the Bird Walker and Kukku Cruiser as well.

Like several other enemies in Tails Adventure, the Rock Throwing Combatants may drop a Ring upon being defeated.

Rock Throwing Combatants are able to pilot different types of vehicles or weapons. They are also strong enough to throw relatively large rocks a fair distance

Combat Walkers are bird combatants in small blue walkers with cannons. They move slowly around the place and will eventually fire single orange cannonball in front of them. Tails can destroy them by simply tossing Regular Bomb.

Rock Throwing Combatants in small hover pods with flamethrowers can be found in Poloy Forest and Caron Forest. They hover slowly around the area and eventually slow down to burst flames towards their target.

Combat Mini-Subs are combatants riding miniature submarines. They usually dash back and forth underwater, though if Tails (in his Sea Fox) comes across them, they will fire single projectiles at him. They can be taken down by firing Anti-air Missiles, Proton Torpedoes or dropping Mines.

Cannon Launchers can be only found during the air strike segment in Battle Fortres 1. These variants pilot turrets, firing small projectiles straight forward. Tails can defeat them by firing Anti-air Missiles below or above them.

In the Sonic the Hedgehog comic and its spin-offs published by Archie Comics, Rock Throwing Combatants along with Bomb Throwing Combatants appear as the main foot soldiers in the Battle Bird Armada, lead by Grand Battle Kukku XV. Their basic design and color scheme are relatively similar to their game counterpart, though they are armed with combat weapons as well and pilot both walkers and hover pods. 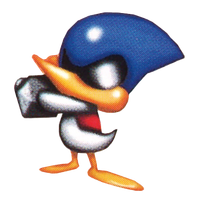