Black and red sports car based on Zavok's dragon mech.

The Road Dragoon[2] is a vehicle that appears in the Sonic the Hedgehog series. It is Zavok's personal racing car for Dodon Pa's Grand Prix.

While most of the cars participating in the Grand Prix were created by Dodon Pa, the Road Dragoon - alongside the Egg Booster, Formula M and Egg Pawns' cars - was made by Dr. Eggman.

The default Road Dragoon is a black and red race car with cyan accents. The car itself is modeled after the Mech Dragon that Zavok used in Sky Road during the Lost Hex incident. The front of the car in particular is shaped like the dragon mech's head. In addition, the hood on the front is open, making it resemble the open mouth of a dragon. Also, inside the hood is an active furnace. The rear of the Road Dragoon is likewise decorated with red spikes and the steering wheel of this vehicle is shaped like Zavok's horns.

In Team Sonic Racing, the Road Dragoon appears as Zavok's race car. During the events of the game, the Road Dragoon was created by Dr. Eggman as a vehicle for Zavok, whom the doctor had to recruit for his team, so he could participate in Dodon Pa's Grand Prix. The Road Dragoon's ultimate fate after the crash of the Final Fortress, which destroyed all the other race cars, is unknown however.

In this game, the Road Dragoon's basic statistics show it has high top speed, defense and boost, but low handeling and acceleration. However, its statistics, as well as its artistic design, can be modified by replacing its parts.

The Road Dragoon has the following exclusive Performance Parts that can be used to modify it:

In Sonic Racing, the Road Dragoon appears as the vehicle for Zavok. 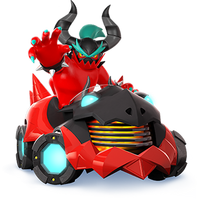 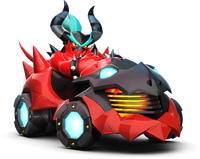