Team Sonic in River Rush onboard the Riptide.

A river winding through a canyon and forests

River Rush is a sub-level in Sonic Boom: Rise of Lyric. Essentially a straight water route, River Rush takes place on a river leading from the banks of Cliff's Excavation Site to the outer boundaries of the Pit. For this level, the player controls the Riptide. It can be entered after obtaining the Sun Crystal and unlocking the level's Crystal Lock in Cliff's Excavation Site. After that, the player must find the three missing parts for the Riptide on behalf of Salty to proceed.

Using Salty's Riptide, Team Sonic traveled down River Rush to reach the Pit. Along the way, they were attacked by Dr. Eggman until they escaped him.

River Rush takes place on a fairly wide river with tall river backs that winds through the landscape. At the beginning, the river goes through a deep canyon in an orange rock region with a few sand banks and flora. Shortly after the beginning, the player enters a tunnel-like cavern with statues and structures from the Ancients. On the other side of the cave's exit, the landscape changes into a lush forest with thickets of grass and tall tress. At the end of the level, there is also a waterfall.

After fixing the Riptide, Team Sonic got permission from its owner Salty to use it to sail down River Rush to the Pit and the next Chaos Crystal. On the way however, the team was attack by Dr. Eggman, who had formed an uneasy partnership with Lyric and was helping Lyric reclaim the map Team Sonic had taken. While Team Sonic escaped Eggman when their boat fell down a waterfall, Eggman thought they had died and that the map was lost, and left to report back to Lyric.

During the course of River Rush, the player will encounter several barriers blocking the path. To proceed, the player has to clear out the enemies that appear in those locations to lower the barriers. However, the player is not able to backtrack the course. Hazardous environmental obstacles in this level include rocks that cause damage when touched, floating mines that explode upon contact (and will damage both the playable characters and any enemies nearby when it happens) and Eggman himself who fires indestructible cannonballs in random lines from his Eggmobile.

To destroy obstacles and enemies, the player can use either Sonic's fast Water Cannon that deals the least amount of damage, Amy's Ice Cannon for temporarily immobilizing enemies and Swarmer Hive, or Tails' slow Mortar Shot which possesses a high damage output. When the Riptide takes damage, the player will lose Rings like normal, but they can obtain new ones by destroying enemies or Rocks.

In River Rush, the player's objective is to reach the end of the river. At the beginning of the level, the player must follow the river into a narrow canyon which has stone walls blocking the path. Destroy them to proceed. Upon arriving at the first barrier then, two waves of Swarmer Hives deploying Swarmers will appear. Destroy them and the barrier will be lowered. Once on the other side of the barrier, the player will follow the river while a moving Swarmer Hive deploys Swarmers at the Riptide. When arriving inside a cave with mines and a barrier blocking the path out however, the Swarmer Hive will come to a rest and be joined by others. Here, the player has to take out two more waves of Swarmer Hives. Once they are gone, the barrier will be lowrered, and the player can follow the river into a new section with mines and Eggman himself, who begins firing his cannonballs everywhere. While avoiding these obstacles, the player has to destroy seven Swarmer Hives to lower the next barrier. The player then has to enter a narrow section with mines and Eggman shooting around the Riptide. After destroying enough Swarmer Hives, the player can exit the section through the exit where the nearest barrier was lowered. This path will lead into a new section with mines where the player to destroy six Swarmer Hives while being pelted by Eggman. After then entering the next section through the unveiled path, the player must destroy eight more Swarmer Hives while Eggman fires as them. After the path out then has been unveiled, follow it along the river while Eggman firs cannonballs at the Riptide. Soon after, the player will reach a waterfall, and the level will end. The player will then automatically be taken to the Pit. 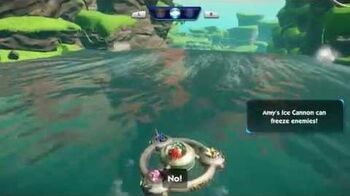