Ringleader[1] (ユニフォーマ[2], Yunifōma?, lit. "Uniformer") is an enemy that appears in Knuckles' Chaotix. It is a mass-produced, soldier-based Badnik model created by Dr. Robotnik.

The Ringleaders resemble hovering robot toy soldiers. They are mostly blue with a top-like torso and what appears to be orange and blue cannons for arms that are not attached to their bodies. They also have two pairs of pink buttons on their chest with golden bands between them, and cylinder-shaped heads with a yellow lines around their foreheads and cartoonish black eyes. Lastly, they have a pair of rotating gray bars on their pelvis which have pink bars on their tips.

The Ringleaders appear exclusively in Techno Tower. In gameplay, slowly hover back and forth, periodically detaching their rotating heli-legs and sending them looping through the air like a boomerang. They can be destroyed using any attack, upon which they will drop a Dark Ring. 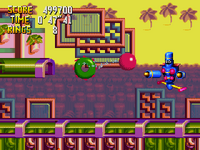