A golden ring of unknown origin.

The classic gold ring. Collecting these, not stamps, is what it's all about.

The Ring, also referred to as the gold ring, is an object that appears in the Sonic Boom series. Ring primarily serve as a unique health system throughout the series; as long as the players hold just one Ring, it will protect them from defeat when taking damage. Instead, the players lose only a portion of their Rings.

The Rings' design is based on either the basic and round-edged wedding rings or solid brass round rings. The size of Rings varies between depictions; in some cases, in-game models show them being about half the size of the playable characters, while others models and cutscenes depict them at about the size of Sonic's head. On their own, they spin around in one spot and either lie close to the ground or float in midair.

While appearing nothing out of the ordinary, Ring can protect their wielders from harm at the cost of themselves. When he received a rough pat on the back, Sonic lost a Ring while showing no sign of discomfort. Rings' unique properties also let their users absorb them, allowing large amounts of them to carried at once.[1]

It is not known where Rings come from and no backstory has been given for them, except that they are spread all over the earth.

Often the most common item in the games, Rings can be found everywhere in the primary playable levels. Generally, they are arranged in large clusters or in strings along pathways, above Bounce Pads, around loops, along rails, or simply in midair. In some instances, they can even be arranged in shapes, such as arrows. In gameplay, the player can collect Rings by simply touching them. They will then added to the player's total Ring count. When this happens, they disappear, only leaving behind a small sparkle effect while a chime can be heard.

As their primary function, Rings prevent their holder from being defeated. Possessing even a single Ring prevents a character from starting over from the last Checkpoint/beginning of the level upon taking damage from things such as impacts with enemies, enemy attacks or damage-inducing obstacles. If a (unshielded) character takes damage while holding Rings, they will drop their Rings which are then scattered in a circular pattern and bounce around the environment, while the playable character is slightly pushed back. However, there are certain dangers Rings cannot protect against, such as being crushed or falling into bottomless pits. Taking damage without a Ring will result in the character's aforementioned defeat.

During the brief period where the players drops their Rings after taking damage, it is possible to recollect the scattered Rings, but they will eventually all disappear after a while. The amount of Rings the player drop when taking damage varies between games. In general, the player will drop all of them when taking damage, while in other games, only a portion of them will be dropped. However, the player will not lose Rings if the playable character possesses a Shield. Also, fewer "recoverable" Rings are in general displayed on-screen when they are dropped than the number actually lost.

Rings are normally earned by picking them up from the levels, but they can also be earned in other ways, depending on the game. Some games have Super Rings which grant multiple Rings, enemies in Sonic Boom: Rise of Lyric release Rings upon defeat, and objects in certain games give Rings when destroyed. Aside from their aforementioned purposes, the Rings have also been used as currency in Sonic Dash 2: Sonic Boom for special purchases.

In Sonic Boom: Rise of Lyric, Rings can be found in every level, hub world and sub-level. In this game, the player only loses a sizable portion of their Rings when taking damage. When attacked by enemies, the amount of Rings dropped is proportionate to how tough the enemy is; the stronger the enemy, the more Rings its attacks can take away. If the game difficulty is set to Extreme Mode, the player loses even more Rings from attacks compared to normal. Also, when falling into a bottomless pit, getting crushed or being defeated, the player always respawns with twenty to thirty Rings in their possession.

In addition to collecting Rings from the environment, the majority of the game's enemies and breakable objects will release Rings upon their destruction which the player then automatically picks up. However, there is an enemy called the Ring Thief which takes away stray Rings. There are as well certain game mechanics that grant extra Rings for the player. Completing some puzzles will release a steady steam of Rings close by and in the speed level sections are signs that will create Ring strings on the paths when touched. Also, in certain levels, there will be Ring trails that pop out of nowhere when approaching paths, as a way to guide the player.

At the beginning of the game, they player can only carry a hundred Rings at a time. However, this limit can be increased up to two hundred Rings by purchasing special upgrades at special totems at Cliff's Excavation Site and on Bygone Island that each increase the player's Ring limit by twenty-five. There are also Power Glyphs that work in conjunction with the player's Ring count. "Risk Taker" will increase the damage of the player's attacks when the Ring count is low, and "Bubble Shield" creates a Shield when the Ring count is at zero.

In Sonic Boom: Shattered Crystal, Rings can only be found in the adventure levels and Worm Tunnels. There are also Super Rings which grant ten Rings, and breakable objects that grant three Rings when destroyed.

When taking damage, which causes the player to drop all their Rings, the player gets stunned and pushed backwards. Just after dropping the Rings however, the player is given a few seconds of invulnerability (represented by the playable character rapidly flashing between visible and invisible).

To earn one of the Tokens from an adventure level or Worm Tunnel, the player must complete a level with a certain amount of Rings. There also Blueprints that aid with Rings when activated. The fourth one ("Map Accelerator 3.0"), highlights Super Rings' locations on the Adventure Map, the fifth ("Ring Defense") lowers the amount of Rings lost when taking damage by 25%, and the seventh ("Ring Attractor") pull nearby Rings towards the playable character. In addition, the twenty-fourth toy the player purchases from Q-N-C's Toy Shop will be a Ring figurine.

In Sonic Dash 2: Sonic Boom, Rings retain their standard functions. However, the player cannot recover dropped Rings due to the fast-paced gameplay. Also, in addition to Super Ring power-ups, the game reintroduces the Magnet which can pull in nearby Rings. A similar effect can be achieved with Sonic's Special Power, the Dash Magnet. There are as well Amy's Special Power, the Ring Hammer, which turns obstacles and enemies into Rings while Dashing. There are also certain Prizes that will award Rings.

In gameplay, the player can collect Rings during each run and then bank them when passing through Junctions. Banked Rings can be used to level up characters and Forever Sprites for future runs.

In Sonic Boom: Fire & Ice, the Rings retain many of their traits from Sonic Boom: Shattered Crystal. This include stunning and pushing the playable character back when Rings are dropped, giving the player about a second of invulnerability. Like before, the player also loses all their Rings when taking damage just once. The player can also destroy breakable obstacles to release three Rings each, which are automatically picked up by the player.

Red Star Rings are a variant of Rings. Red Star Rings are slightly larger, red rings with a star in their center. In gameplay, they are used as the premium currency. They have only appeared in Sonic Dash 2: Sonic Boom.

The Super Ring are the most commonly used variations of Rings, which are often found inside breakable boxes. Such boxes have a Ring icon on them, and breaking them will grant the player multiple extra Rings. Depending on the game, the Super Rings can give ten or twenty Rings at once. They first appeared in Sonic Boom: Shattered Crystal. 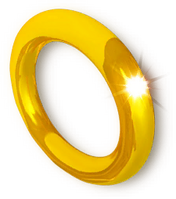