The Rhinotank, from Sonic Adventure.

Rhinotank[1] (リノタンク[2][3], Rinotanku?) is an enemy that appears in the Sonic the Hedgehog series. It is a mass-produced, rhinoceros-based Badnik model created by Dr. Eggman.

Rhinotanks are based on rhinoceros, and possess turquoise and gray armor. They are bulky robots with motor engines on their backs, a pair of black tracks on each side, small ears and a yellow horn on their noses. Above each of their tracks are also grey frames with yellow and black hazard stripes.

In Sonic Advance, the Rhinotanks were slightly modified. Here, they lack ears and back engines. They also have two horns on their heads instead of one, and they have only a single track that rises up horizontally from behind.

In gameplay, Rhinotanks move around the terrain until they notice the player when they get nearby. They will then slowly start charging towards the player in a straight line. The player can easily dodge their attack and use the Spin Jump, Homing Attack or gun fire to defeat them.

In Sonic Advance. Rhinotanks are encountered in the Neo Green Hill Zone and Angel Island Zone. In this game, their attack patterns are similar to the RhinoBots' in Sonic the Hedgehog 3. Usually rolling back and forth, they will start charging towards the playable characters when they get close. Using the Spin Jump, Spin Attack, Spin Dash or melee moves will defeat a Rhinotank easily. Also, upon their destruction, they will release an Animal.

In Sonic Rivals, the Rhinotank appears as one of the collectible cards in the game, They player can collect this card randomly from racing in Story and Challenge Modes.

In the Nintendo 3DS version of Sonic Generations, Rhinotanks from somewhere across spacetime appear as enemies in Emerald Coast. In this game, they have their original design.

Rhinotanks possess sharp horns that are capable of skewing an opponent.

In the Sonic the Hedgehog comic series and its spin-offs published by IDW Publishing, the Rhinotanks are Badniks created by Dr. Eggman. Their past is virtually identical to their game counterparts', up until after the events of Sonic Forces. 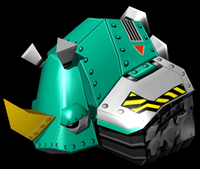 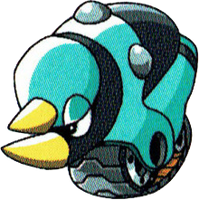 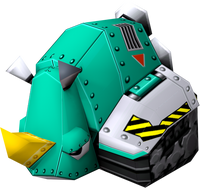 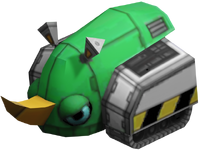