A Rhino Cannon in Pumpkin Hill.

The Rhino Cannon[1] is a robot deployed by the military organization Guardian Units of Nations in Sonic Adventure 2, and a part of the Rhino series.

The Rhino Cannon resembles a Rhino Jet with a cannon mounted on top.

The Rhino Cannon stays in place, and fires bombs at the player should they approach. Upon its destruction, it awards the player one hundred points. Its bombs are of the same type and appearance of those of the Kikis', and can also be picked up and thrown.

In the anime series Sonic X, the Rhino Cannon appeared during the Sonic Adventure 2 adaptation saga. In this media, they were constructed after the Perfect Chaos incident to combat Dr. Eggman's forces. 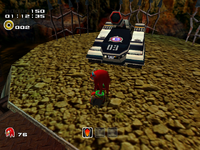