The RhinoBot[1] (リノボット[2], Rinobotto?), alternatively spelled as Rhinobot[3][4] and later known in Japan as the Cyclone (サイクロン, Saikuron?),[5][6] is an enemy that appears in the Sonic the Hedgehog series. It is a mass-produced, rhinoceros-based Badnik model created by Dr. Eggman.

As their name suggests, the RhinoBots are based on a rhinoceros. RhinoBots are similar to Moto Bugs in terms of design, with a single wheel below their body. Their body is covered in gray armor with orange lines and small ventilation holes. RhinoBots' head reminisces of a rhinoceros, with two horns on their orange nose area, mean black eyes and metallic triangular ears.

In Sonic the Hedgehog 3 and its add-on continuation Sonic the Hedgehog 3 & Knuckles, this Badnik is referred to as RhinoBot[1] (リノボット[2], Rinobotto?). In gameplay, they appear in Angel Island Zone where they drive around back and forth on flat terrain with linear pattern. Because of this, RhinoBots do not drop down from hillocks, but rather does a hard U-turn. RhinoBots will also not fall off ledges and will turn around if they come across one.

When spotting the player, the RhinoBots will try dashing into the playable character. While they can rival the playable characters' running speed, they cannot keep up with a Spin Dash. The player can simply jump over the RhinoBots, but they will then do a U-turn and attempt attacking the character from behind. The player can simply Spin Jump, Spin Attack into RhinoBot or even load the Spin Dash to defeat it and free Animal inside of it.

In Sonic Rivals, the RhinoBot appears as a collectible card.

In Sonic Mania Plus, RhinoBots reappear as enemies. In terms of design, they look exactly how they did in Sonic the Hedgehog 3. They only appear in Angel Island Zone. It terms of attack patterns, they behave just like in their debut by driving around back and forth on flat terrain with linear pattern and charging at the player when they spot them. They are similarly easily destroyed by any attack. Also, upon their destruction, they release an Animal.

RhinoBots are extremely fast Badniks, matching speed with the likes of Sonic, Tails and Knuckles. Their two horns also enables them to skewer their foes by charging into them.

In the Sonic the Comic series published by Fleetway Editions, the RhinoBots had a gray color scheme and were capable of speech. In a simulation of a Badnik attack on the Emerald Hill Zone, a RhinoBot gave a decent chase to Sonic before getting destroyed.

A RhinoBot was included in a diorama by First 4 Figures depicting Sonic and Tails in Angel Island Zone. The diorama was available in three different editions, two of which depict the zone on fire. The Badnik appears in all editions of the statue. This is the second badnik that has been part of a statue by the company, the first being Metal Sonic. 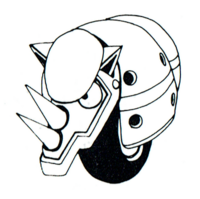