For other uses, see Rexon (disambiguation). Not to be confused with Rexxon.

A Rexon, from Sonic the Hedgehog 2.

It hides in magma, rising up to shoot at its targets.

The Rexon[1] (ザウラ[2], Zaura?), also known as the Rexor,[3] is an enemy that appears in the Sonic the Hedgehog series. It is a mass-produced, plesiosaur-based Badnik model created by Dr. Robotnik that resides in lava pools and shoot its targets with energy projectiles.

Rexons are Plesiosaur-looking Badniks with heavily armored carapaces. Most of their armor plating is light purple while their underbellies are light grey. For limbs, they have four gray flippers with purple front edges. They also have very long necks made up of four spheres, yellow details around their bodies, gray jaws, and two cartoonish black eyes each.

The first appearance of this Badnik was in the 16-bit version of Sonic the Hedgehog 2, where it served as an enemy. This time around, this Badnik is referred to as Rexon[1] (ザウラ[2], Zaura?). In this game, the player encounters them at the lava pools in Hill Top Zone.

In gameplay, when the player gets near, the Rexons' head and neck will pop out of the lava and start shooting energy projectiles at the player from one position if they are in front of it. However, since the Rexons do not change their heads' direction, it is easy to defeat them from behind using the Spin Jump. Also, upon their head's destruction, they release an Animal.

In Sonic Blast, Rexons appear in Red Volcano Zone Act 1,[4] albeit sporting a different red colored design. Similar to their appearance in Sonic the Hedgehog 2, these Rexons emerge from lava pools and will shoot projectiles at the player when they get close, while steadily moving around in only one position. However, only their heads appear while their main body seemingly remains beneath the lava.

Like their previous appearances, these Rexons do not change the direction of their heads after coming out of the lava, making the easy to defeat. Upon defeat, they will reward the player with 100 points, but like in every Sega Game Gear/Sega Master System Sonic game, these Rexons do not have Animals inside them that they release upon defeat.

In Sonic Rivals 2, the Rexon appears as a collectible card which can be earned from getting the high score for the Egg Liner in Blue Coast Zone.

In the Nintendo Switch version of Mario & Sonic at the Olympic Games Tokyo 2020, the Rexons appear as enemies in the "Tokyo Sky Flight" mini-game. Here, they possess a sprite-based appearance derived from their sprites in Sonic the Hedgehog 2. However, they are several times larger in this game than in Sonic the Hedgehog 2, their size taking up most of the screen's height. During the "Tokyo Sly Flight" mini-game, Rexons will try shooting the playable characters with fireballs that they spit from their mouths. In addition, due to how the screens scrolls forward during the mini-game, the Rexons pose an ever-encroaching threat. A Rexon can be defeated with any of the Tornado's armaments, but it can take a lot of damage before getting destroyed. Also, when destroying a Rexon, the player receives 1,000 points.

The Rexons are shown to be very resistant to extreme temperatures, as they can dive their entire bodies into lava. They can also shoot energy projectiles from their mouths.

The Rexon made a small appearance in Sonic the Hedgehog Yearbook 1992' story "Space-Hedgehog" where it and a Spiker ambushed Sonic the Hedgehog, with Rexon shooting fireballs at him. After beating Robotnik, Sonic defeated both the Rexon and Spiker easily and released the animals inside them.

In the Sonic the Comic series published by Fleetway Editions, the Rexons are a part of Dr. Robotnik's Badnik army. They only appeared in Hill Top Zone where they ran Robotnik's operations from lava pools. Unlike most other Badniks in the comics, the Rexons retained a consistent design during the series' run.

In the Sonic the Hedgehog comic series and its spin-offs published by IDW Publishing, the Rexons are Badniks that serve Dr. Eggman. Their pasts are identical to their video game counterparts', up until after the events of Sonic Forces. 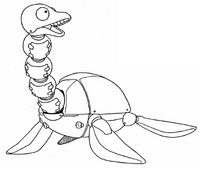