The researchers[1] are characters that appear in the Sonic the Hedgehog series. There are scientists who resided on the Space Colony ARK over fifty years ago.

The researchers were indirectly mentioned in Sonic Adventure 2 and its remake Sonic Adventure 2: Battle. In this game, it is mentioned that they worked alongside Professor Gerald Robotnik on Project Shadow onboard the Space Colony ARK. When the ARK was shut down and have its protects ceased, GUN executed everyone on the ARK including the researchers.[2][3]

In Shadow the Hedgehog, the researchers appear in The Doom as the objective for the Hero mission. Ten injured researchers are found throughout the stage and Shadow must use Heal Units (or the Heal Cannon if unlocked and found) to revive them.

Being involved in the research projects conducted by Gerald Robotnik, it stands to reason that the researchers possess a great deal of knowledge in the fields of science. 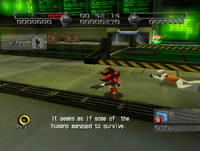 A researcher on the right side of Shadow.