Refreshinator[1] (ラフレシアン[2], Rafureshian?, lit. "Rafflesian") is the boss of Planet Wisp in the Wii version of Sonic Colors and Sonic Colors: Ultimate, and an upgraded version of Tropical Resort's boss, Rotatatron.

Refreshinator has a completely different appearance, with two eyes stacked vertically (similar to Metal Madness). Unlike Rotatatron, it has a smile made out of metal wires, formed to look like spiked teeth, and its face is now orange and its body is green.

Sonic finds the generator and comments that "these guys are getting harder and harder to find." As soon as that is said, Refreshinator comes. With Sonic saying that Dr. Eggman can give up now, the hedgehog then battles, with no response.

After the battle, Sonic is having a conversation with the destroyed Refreshinator, but gets caught by Tails. Sonic tries to remind him that Planet Wisp is free, but he refuses to forget what he saw, and states that he hasn't seen him talk to a pile of metal.

Once the battle starts, the player must damage Refreshinator by hitting its weak spot (its head), which can be reached by using the nearby circular platforms, three times with a normal Homing Attack. The boss will occasionally fire rotating electric lasers while covering its head with a protective shell; the lasers can be avoided by standing underneath one of the circular platforms. Pink Wisp capsules are found on the red platforms and can be used to do double damage to the boss. Each time Refreshinator is damaged, it will release a pulse of electricity that slowly moves around the arena. After sustaining enough damage (thrice with a standard Homing Attack and twice with two Pink Spikes or with a single Homing Attack and Pink Spikes combo), Refreshinator will explode and give off a shower of Rings.

In Sonic Colors: Ultimate, beating Refreshinator with under three hits unlocks the achievement, "Eye Of The Hedgehog". 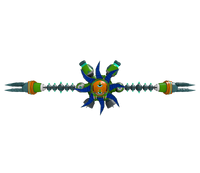