Sonic the Hedgehog 2 (2013 remaster) (only appearance)

The Redz[note 1] is an enemy that appears in the Sonic the Hedgehog series. It is a mass-produced, tyrannosaurus-based Badnik model created by Dr. Eggman.

Designed for Sonic the Hedgehog 2, the Redzs ended up being cut from the final release of the game. However, they would later appear in the 2013 remaster of the game.

Originally, Redzs were going to appear in the Hidden Palace Zone for Sonic the Hedgehog 2, but the Zone and its Badniks were both cut from the final game. Regardless, the Redzs could still be found in the Nick Arcade and Simon Wai prototypes. Here, their attack pattern is very similar to the Moto Bugs' in the sense that they walk back and forth within a certain area and do not attack, making them easy to be destroyed.

The Redzs are based on Tyrannosauruses, although they are much smaller, relatively stocky and resembles more of a Velociraptor. They have a red round body, tail and head with short and thick gray legs, orange two-clawed feet, short red arms with two-clawed hands, black eyes, and a gray jaw with sharp teeth.

The Redzs possess a fire breath that allows them to spew flames over a fairly large area.

The design document listing the Redz enemy as "Tyrannysaurus Rex". 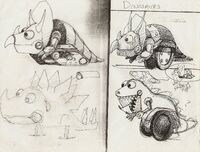 Sketches of enemies for the Hidden Palace Zone, including the Stegway and Redz.