Red Wisps are lively, but slightly scatterbrained Wisps that have the power of the Red Burst.

The Red Wisp (レッドウィスプ, Reddo U~isupu?) is a creature that appears in the Sonic the Hedgehog series. It is a type of Wisp that grants the Red Burst Color Power.

In gameplay on the Nintendo DS version of the game, the Red Wisps appear as Wisp Capsule power-ups that enables the Red Burst. The player encounters the Red Wisps in Tropical Resort and Sweet Mountain.

In the Nintendo 3DS version of Sonic Generations, the Red Wisps appear in Tropical Resort Act 2 as Wisp Capsule power-ups that enable the Red Burst.

In the Nintendo 3DS version of Sonic Lost World, the Red Wisps appear as Item Box power-ups that enable the Red Burst. The player encounters the Red Wisps in Windy Hill, Sky Road, Silent Forest (Extra Zone only), and Lava Mountain, though they are not unlocked until the player enters Lava Mountain.

In Sonic Forces, the Red Wisps returned as Wisp Capsule power-ups for the Avatar's Burst Wispon, which is the only Wispon that will accept them. With the Red Wisp, the Burst Wispon is able to perform its special action for a limited time. The player encounters the Red Wisps in Spaceport, Prison Hall, Arsenal Pyramid, Park Avenue, Aqua Road, Capital City, Guardian Rock, Null Space and Imperial Tower.

In Team Sonic Racing, the Red Wisps appear as Item Box power-ups on the game's race tracks. They are exclusively picked up by Speed-Type racers, but can be transferred to other character types via Item Box Transfer. In gameplay, the Red Wisp power-ups allow the user to leave a flaming trail from the Red Burst behind them to damage rival racers.

In the comic tie-in, during one of the early races in Dodon Pa's Grand Prix, a Red Wisp was used by Blaze as a part of a collaboration attack on Dr. Eggman, who had intruded on Team Sonic and Team Dark's race.[2]

Being Wisps, the Red Wisps are halcyon and social. Overall, they are peaceful, playful, non-hostile and friendly of nature, and enjoy spending most of their time playing with others. While they are not fighters, they are nonetheless brave and very helpful towards their friends and allies.

The Red Wisps are a lively and energetic type of Wisps, but come off as slightly scatterbrained.[1]

The Red Wisps are able to levitate in midair at will, which serves as their main method of transportation.

The Red Wisps are able to generate and store their own unique variant of a powerful energy known as Hyper-go-on inside their own bodies, which is their life source. It is unclear to what extent they can use their own Hyper-go-on, through they have been shown being able to restrain black holes made of Hyper-go-on.

The Red Wisps are able to pass on a fraction of their Hyper-go by phasing into the recipient. When organic beings or robots receive their Hyper-go-on, they can transform into the Red Burst which can induce powerful explosions.

The Red Wisps made an appearance in the Archie Comics' adaption of Sonic Colors, in Sonic the Hedgehog #219. In the comics, some Red Wisps and a few other Wisps were chased by Orbot, Cubot and a pack of Egg Pawns, but one Red Wisp was saved by Sonic. After Sonic destroyed the Egg Pawns in a flash and send Orbot and Cubot running. A Red Wisp then joined Sonic, Tails, Yacker and some other Wisps, as Sonic ventured out to save the Wisp race from Eggman.

In the Sonic the Hedgehog comic series and its spin-offs published by IDW Publishing, the Red Wisps are aliens from Planet Wisp. Much like in the games, some of them have settled down on Sonic's world where they help out the planet's inhabitants from time to time. 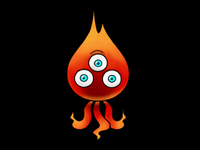