For other uses of the term, see Red Star Ring (disambiguation). For the World Ring, see Red Ring (World Ring).

Unique red rings with a star in the middle.

In the console/PC version of Sonic Generations, these rings are referred to as Red Star Rings.[1] In this game, there are five Red Star Rings in each Act. Collecting one unlocks music or concept art. If all the Red Star Rings are collected in an Act, one giant Red Star Ring will hover over the stage and a new Skill will be unlocked.

If the player talks to one of Sonic's rescued friends in the White Space when they have the icon of the Red Star Ring above them, they will give them a hint as to where their respective Act's Red Star Rings are.

In Sonic the Hedgehog 4: Episode II, one Red Star Ring appears per Act. In this game, the only purpose they serve is for 100% completion as well as an achievement/trophy.

In the 2012 remake of Sonic Jump, there are three Red Rings to collect in each act.

In Sonic Dash, Red Star Rings appear early along the first run of each day, but they can also still be obtained by completing certain objectives, or with real money and can be used to unlock new characters or to buy re-tries for whenever the player fails.

On the Wii U version of the game, the player can earn a Red Star Ring radar by completing any of Omochao's missions, which makes it easier to locate Red Star Rings.

In Sonic Jump Fever, the Red Star Rings are collectible items placed in the Zones, although a limited number of these do so per day. They can also be obtained occasionally from Daily Rewards or from the Daily Spin. However, if the player equips him/herself with the Hero Rare Chao or Hero S-Rare Chao, it can reveal hidden Red Star Rings in the Zone. They are mainly used as the in-game currency to purchase Gold Rings or use the Spin (when the free Daily Spin or video to obtain a free spin are both unavailable). Red Star Rings can also be purchased by the player using real money.

In Sonic Runners, Red Star Rings serve as the game's premium currency. They can be earned in very small batches during runs or boss fights, but will mostly be received through daily bonuses and completing episodes. The player can spend Red Star Rings on playing the Premium Roulette to earn Chao and RC vehicles-based Buddies, or exchange them for Rings. During a stage, the player can continue a run through after losing once by paying five Red Star Rings.

Occasionally, the game had campaigns, sometimes in acknowledgement of certain events, that offered the player additional Red Star Rings if they logged in on Sonic Runners within a certain time period or completed certain tasks.

The Red Star Rings are scheduled to make an appearance in Sonic Forces. In this game, they reprise their roles as collectibles that can be obtained from the levels.

In the Sonic Boom franchise, Red Star Rings appear in Sonic Dash 2: Sonic Boom where they serve the role as the game's premium currency, much like their mainstream counterparts.

Sonic Colors (Wii version)
Add a photo to this gallery 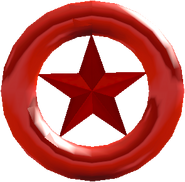 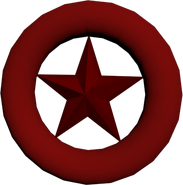 A Red Star Ring model.
Add a photo to this gallery

Retrieved from "https://sonic.fandom.com/wiki/Red_Star_Ring?oldid=1912277"
Community content is available under CC-BY-SA unless otherwise noted.