Red Pine (レッド・パイン, Reddo Pain?) is a minor character and an antagonist in season three of Sonic X. He is one of the four Metarex Commanders that serve as Generals of the Metarex army under the leadership of Dark Oak.

Red Pine has a stocky build, with his body being composed of mostly crimson armor, with several horns on his head, as well as an orange eye, and two other similarly colored orbs on the top of his head, and chest. His cape which denotes his position as a Commander of the Metarex, is a brighter shade of red than the rest of his body.

Many years ago, Red Pine was originally a male member of a plant-like alien species who had decided to follow Lucas and his followers in staying behind on their planet to fight. Despite the power they had obtained in their monster forms, they met the opposition with much failure. Eventually Lucas came up with a plan to transform their bodies into that of techno-organic machines. Red Pine and the others then took new identities based off of various flora plus the color of their new bodies. Under the leadership of Lucas (now known as Dark Oak), Red Pine and the others eventually built robots and raised an army, referring to themselves as the Metarex.

When Sonic the Hedgehog and co. invaded a Metarex base looking for the remaining Chaos Emeralds, with Sonic and Dr. Eggman's groups fighting over the Emeralds, Red Pine arrived there with his flagship and an entire armada of Metarex fighters and introduced himself to his enemies. When the base was compromised, Pine ordered his fleet to destroy it. After both Sonic and Shadow absorb the Chaos Emeralds and become Super Sonic and Super Shadow, Red Pine was shocked that there were two individuals who were able to use the power of the Chaos Emeralds. With Cosmo having ejected the Planet Egg, the base was set for destruction and a wormhole was opened inside of it - the gravitational force drawing everyone present towards it. Red Pine ordered his subordinates aboard his flagship to increase their engines to maximum to escape it, however he was informed that they had expended too much power to now pull away, and Red Pine was ultimately killed when his flagship was pulled inside.

After Red Pine's death, his fellow commanders discussed what had happened, with Yellow Zelkova mentioning it was strange that he was defeated, and that he was usually very careful, with Pale Bayleaf also admitting his plan of attack was very different and unlike him. Black Narcissus had stated he intended to avenge his fallen comrade, not caring what his leader had thought about the matter.

Red Pine is the most cool-headed personality amongst the Metarex Commanders.[1] According to Zelkova, Red Pine was very careful with his plans, something to which Pale Bayleaf had admitted that he acted very unlike himself, referring to his failed plans that ultimately resulted in his death.

As a male member of Cosmo’s species, Red Pine had the ability to enter Mover Mode. However, maintaining this transformation would drain him of his energy and extended use would kill him

Red Pine had great strength, with Yellow Zelkova claiming that he was almost as strong as him. 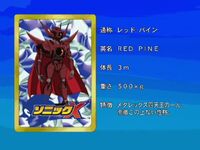