The already tricky Killer Bee just got trickier: better, faster and stronger than before.

The Red Killer Bee (レッド・キラービー, Reddo Kirā Bī?) is an enemy that appears in the nighttime Stages in Sonic Unleashed. They are a variant of Dark Gaia's Minions and an empowered version of the Killer Bee.

Contrary to their name, the Red Killer Bees look more like wasps than bees. Like other empowered members of Dark Gaia's Minions, they bear a strong resemblance to their weaker counterpart (Killer Bees), but possess a different color scheme. They have long, thin horns and antennae on their foreheads, and their mouths look like beaks with tusks. Their thoraxes are spherical, with small spikes and four wings, and they have purple smoke emitting from their backs. They also have stingers on the ends of their abdomens that resemble arrowheads. Finally, they have red, pink, magenta and black skin with cyan body markings.

The Red Killer Bees and the rest of Dark Gaia's Minions came into being when Dark Gaia broke apart at the beginning of Sonic Unleashed due to its premature awakening by Dr. Eggman. These fragments were then spread across the earth and became Dark Gaia's Minions, with the Red Killer Bees amongst them. They first appear in Arid Sands Night Act II: The City of Sand in the Wii/PlayStation 2 version and in Dragon Road Night Act 1 in the Xbox 360/PlayStation 3 version.

In battle, the Red Killer Bees shares the same attack patterns as the Killer Bees. They will circle Sonic to signify they are getting ready to attack, and when attacking, they will strike using their large stingers, either by launching themselves into Sonic from behind at incredible speed or dealing a barrage of stings when up close. The Red Killer Bees also possess wide movement capabilities that let them dodge attacks by either moving out of the player's range or flying into the air for then to launch a counterattack, making it extremely hard to strike them.

Upon the reconstruction of Dark Gaia by Dr. Eggman, all of the Red Killer Bees (along with the other types of Dark Gaia's Minions) were returned to the beast, who was later defeated and sealed within the planet's core.

The Red Killer Bees are able to move around by teleporting into an area in a puff of purple smoke. As a Dark Gaia minion, the Red Killer Bees can possess people by latching onto the deepest, darkest part of the heart, and generate despair, negative emotions or even erratic behavior that are completely opposite to the person's personality.

The Red Killer Bees also possess a barbed stinger which they use to pierce their opponents. 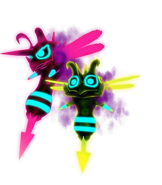