A red bridge in a besieged city.

Watch out, Metal Sonic was spotted near there.

Red Gate Bridge (レッドゲートブリッジ, Reddogētoburijji?) is the nineteenth stage in Sonic Forces, and the second stage in the game to use the Tag Team gameplay style.

Red Gate Bridge mainly takes place on the signature bridge that cuts through the City and the surrounding coastal region. During the events of the game, Sonic the Hedgehog and the Avatar came here to defeat a Metal Sonic Phantom Copy.

Red Gate Bridge starts out on a red stone bridge on the mainland, just outside the city limits of the City. This red bridge leads through a blocky hill landscape at the coast that has layered soil in different shades of brown and green grass on top of the hills that favors Green Hill. After this area, the player enters a illuminated gray sewer tunnel with numerous rusty and leaky water pipes. This tunnel leads to the Red Gate Bridge itself, which, as its name implies, is a multi-sectioned through arch bridge. This bridge has suffered heavy damage from the attacks on the City by the mass-produced Death Egg Robots: the concrete roads have been torn up, pieces of the bridge are missing, and much of its framework is bend out of shape. The bridge itself leads across a wide water belt to other coasts similar to those on the mainland.

While the Resistance awaits Tails and Classic Sonic's return from the Chemical Plant, Amy reports that Metal Sonic has been spotted in the City after reprimanding Knuckles for tempting fate due to being bored waiting for them to return. Stepping up to stop Metal Sonic's rampage, Sonic heads to the City, taking the Avatar with him, to deal with his robot double.

Upon arriving in the City, Sonic cannot see Metal Sonic anywhere, despite Amy having confirmed the sightings of him. In that very moment however, a mass-produced Death Egg Robot ambushes Sonic and the Avatar. Thanks to the Avatar though, the heroic partners are able to avoid the massive robot's attacks and strike back, destroying it. Sonic and the Avatar subsequently resume their hunt for Metal Sonic. Upon finding him however, they discover it is another Phantom Copy, and a strong one at that too. Despite this, the two heroes are able to destroy it. In the aftermath, Sonic celebrates their victory by offering the Avatar a fist bump, something which the Avatar happily accepts. With the elimination of the Metal Sonic Phantom Copy and the Death Egg Robots with it, the City is finally purged of the Eggman Empire's forces and liberated by the Resistance.

Like in other Tag stages, the player controls both Sonic the Hedgehog and the Avatar at the same time here, with the lead character switching to Sonic when Boosting and to the Avatar when using the Wispon. To accommodate the different characters, the stage has mechanics for both of them. For Sonic, the stage has Wisp Capsules with White Wisps along the way so the player can charge their Boost Gauge. For the Avatar, the stage has Wisp Capsules with miscellaneous Wisps for fueling the Avatar's different Wispons. However, any Wisp Capsule containing Wisps that do not match any of the Wispons the player has currently obtained will be rendered intangible and transparent until the player obtains their Wisp's associated Wispon. This means, for example, that if the player does not have an Asteroid Wispon, then the capsules with Indigo Wisps will be unobtainable. If the battle goes on for too long, Sonic will stop, and this will count as a failure.

The stage starts out with Sonic and the Avatar running across a bridge. A mass-produced Death Egg Robot soon after smashes the bridge beneath their feet. This initiates a Real-Time Interaction cinematic. During it, the player must press

when the green rings that appear overlap; the better the player times the button presses, the greater the point bonus the player will receive.

The boss encountered on Red Gate Bridge is a super-sized Metal Sonic Phantom Copy. During the fight, Metal Sonic will try to stay ahead of the characters, who must chase after him, while attacking with energy pillars and the V. Maximum Overdrive Attack. Also, when the player gets close, he surrounds himself in a protective barrier of Moto Bugs and Egg Pawns. To damage Metal Sonic, the player has to clear out the Moto Bug barrier surrounding him, and then attack him with the Homing Attack, Wire Attack, or the Wispon. Repeat this pattern until he is defeated. 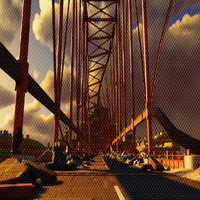