Sonic News Network
Register
Don't have an account?
Sign In
Advertisement
in: Articles in need of expanding, Crossover characters
English

For the version of this character in the Archie Comics, see Reala (Archie).

Welcome to your nightmare!

Reala (リアラ, Riara?) (pronounced ree-all-a) is one of the primary antagonists of the NiGHTS series. A first-level Nightmaren created to be Wizeman's right hand along with NiGHTS, Reala is obedient towards his creator and leads the Nightmaren army. In contrast to NiGHTS' kind and inviting personality, Reala is cruel and insidious. Due to their equal skills and opposing personalities, NiGHTS and Reala are strong rivals.

Reala's two primary colors are red and black. Reala wears a Persona Mask on his face in NiGHTS: Journey of Dreams as a symbol of loyalty to Wizeman.

In Sonic Adventure Reala appears in the NiGHTS poker pinball machine in Casinopolis as one of the cards.

In Sonic Pinball Party, though Reala never actually appears in person, his name can be seen in the character tournament as he competes in the EGG cup, facing off against Shadow and losing to him. His theme song is used for the Nightmaren boss battles on the NiGHTS board which Reala appears in as the final Nightmaren.

In Sega Superstars Tennis, Reala is an unlockable and playable character representing the NiGHTS series, along with NiGHTS themself.

Reala returns in Sonic & All-Stars Racing Transformed, the sequel to Sonic & Sega All-Stars Racing, alongside NiGHTS. Reala races with himself as the vehicle while a Goodle drives him. In All Star mode, the Goodle disappears and Reala transforms back into their regular form, throwing Mare Balloons at the other racers.

In the Wii U version and PC version of Sonic Lost World, Reala appears in the NiGHTMARE Zone DLC stage alongside the other bosses from the original NiGHTS game. Unlike the rest of the bosses, Sonic never confronts Reala directly. Instead Reala traps Sonic in various nightmares through Paraloop portals. After the rest of the bosses are defeated, NiGHTS appears and Paraloops Reala, freeing Sonic from Wizeman's nightmare.

In the Archie Comics, Reala appears during the Worlds Collide crossover alongside NiGHTS where they fought off Sigma's Mavericks and their attempt to destroy their world before joining the Unified Army to stop Sigma. 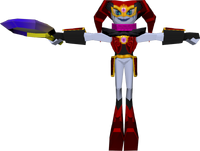 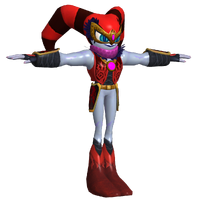