This course is set on the ramparts of a castle set in a snowy area. It is a fairly straightforward course with a few sharp turns and several heaps of snow meant to slow down the player. The first half of the race comprises mainly bridges and snowbanks on a straight piece of track. Because it is easy for the player to see opponents ahead of him, the player can easily attack a forward opponent with his weapons. However, this tactic can also be used against him by opponents further back.

The other half of the track consists of towers and wood planking. The player must take sharp turns in the tower to avoid hitting the wall. He must also be aware of giant eggs that fall on the wooden planking. There is a short cut in this area after the first tower. Instead of going into the next tower, the player can steer to the right onto a section of wooden planking covered with boost panels. This path merges with the rest of the track just before the finish line.

For Blizzard Castle-located tracks, such as Rampart Road, these are the following tracks selectable for the course: 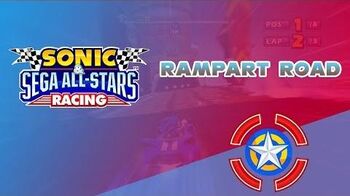