An Board type Extreme Gear with unlimited Gear Changes.

The only gear with unlimited gear changes. This single gear can rule any terrain!

The Rainbow (レインボー, Reinbō?) is a Board type Extreme Gear that appears in Sonic Riders: Zero Gravity. It can perform Gear Change an unlimited number of times in a race.

According to its profile, the Rainbow has the potential for unlimited Gear Changes, allowing it to work in any terrain. It can be purchased at the shop for 9,999 Rings.

The Rainbow, like most other Board type Extreme Gears in Sonic Riders: Zero Gravity, has a distinct board-like shape, but is much thicker and smoother than the Board types in Sonic Riders. The central section of the Rainbow is a straight figure, with two circular cyan foot panels on the top and a black area between them. On the front it has the half of a large ring-shaped tube, with green exhaust ports on the back points, attached, and around the rear it has a rectangular curve.

True to its name, the Rainbow is a very colorful Extreme Gear, possessing red, blue, green and yellow highlights on its front and on its rear curve, and a blue area on the foremost front. It also have two light blue circular foot panels on the top surface of its central body.

As a Board type Extreme Gear in Sonic Riders: Zero Gravity, the Rainbow is well-balanced in its basic attributes with average statistics, and is suited for general riding. 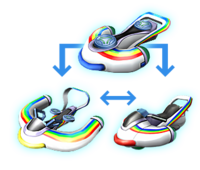 A diagram of the Rainbow transforming between an Air ride type, a Bike type and a Board type.