Radical Highway (ラジカルハイウェイ, Rajikaruhaiu~ei?) is the fifth stage in the Nintendo 3DS version of Sonic Generations. It represents Sonic Adventure 2 in the Dreamcast Era.

Radical Highway Act 1's level layout is mostly made up of straight pathways for Classic Sonic to run along and a large number of slopes that can be used by the player to gain speed quickly by rolling down along them. In comparison to the original Radical Highway, Classic Sonic is able to bop and hop across the highways instead of simply charging forward.

Throughout the Act, the player will encounter spinning barrels that block the path. Instead of using the Somersault to get under them however, Classic Sonic can roll under them by pressing down on

at the same time while running or by using the Spin Dash. The Act also features Horizontal Bars to swing from, upward-going air currents that Classic Sonic can ride, Pulleys, Rockets, and chains of Gun Beetles that can be skipped across with the Homing Attack to reach higher areas. Also, halfway through the Act, the "Got Ring?" blimp that have been following Classic Sonic will move into position so that Classic Sonic can use it to bounce over a wall.

In Radical Highway Act 2, Modern Sonic runs through the Act's corkscrews and suspended highways, much like in Speed Highway. The Act features the original Radical Highway's bridges with their suspension rails that Modern Sonic can grind across. Along the way, the player has to dodge Blue Eagles that are attempting to attack Modern Sonic from midair. Vulkan Fighters also appear, who will float stationary in midair and attempt to shoot Modern Sonic with machine gun turrets. This Act also features many of the same gimmicks that appeared in the first Act, including hidden Rockets that can lead to different shortcuts.

This Act's level layout is constructed like a pseudo-3D environment where different routes are set in-between each other in different layers. This means that, depending on the player's choices, Modern Sonic will either move into the foreground where he will grind on the bridges, into the middle-ground that lead through the middle of the bridge, or into the background where the player can avoid platforming sections. 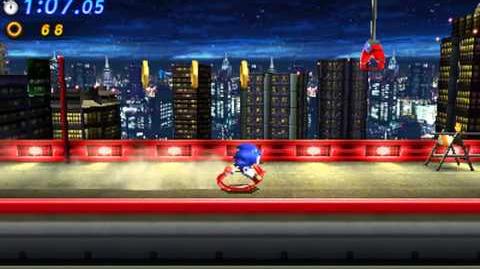 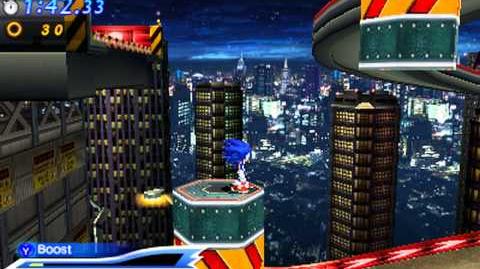