A highway under construction in Central City.

We interrupt this broadcast for an important newsflash. There has been a break-in at the federal reserve bank today. Mysteriously, the only thing that was stolen was the Chaos Emerald. According to eyewitnesses at the scene, the suspect was identified as the world-renowned hero, Sonic the Hedgehog. The suspect was seen fleeing the scene, destroying the reserve's guard robots in his path. Stay tuned for more details.

This level takes place in an area that resembles San Francisco's Golden Gate Bridge in the dead of night, which further enhances the "Central City" atmosphere.

Shadow is surrounded by the military and police after stealing the Chaos Emerald from the Federal Reserve Bank. As he watches them, he has a flashback of running down a hallway on the Space Colony ARK with Maria. Returning back to the present, Shadow promises Maria revenge against humans.

Throughout the stage, there are huge suspension cables of the bridge that Shadow can Grind on. Performing tricks perfectly in this level can allow Shadow to cover great distances and skip large sections. This level has many enemy robots, as well as a few lightning fast bomber jets.

If the player stays in the middle of the road where most of the Rings are, this mission can be completed quickly, especially if the player has the Air Shoes to Light Speed Dash.

Getting to the necessary Ancient Ruin for this mission can be a little tricky. After the second Point Marker and the second loop, the player should see a Ramp ahead of them. They must gather speed and perform a trick off it. This panel provides a fast shortcut to a Spring overhead, which will launch the player to a platform above with a swing bar at the end of it. They must swing upon the pole to fly to the elevators.

The player must reach the top platform and Homing Attack across the Spark Beetles ahead to access the platform that leads to one of the bridge's support towers. From that point, they should Grind down either one of the cables on the left or the right, which are positioned behind the player, to reach the previous support tower. On that tower is the Ancient Ruin, which when activated with the Mystic Melody, will make a pair of platforms appear. These platforms lead to another platform where the lost Chao is.

This mission is extremely difficult and requires mastery over the stage to complete. Light Speed Dash whenever possible, launch from every Ramp, and swing from every swing bar.

In Hard mode, it is more difficult to get across the bottomless pits. The safety net is also gone. The player must thus take the high route, where the series of enemies has been replaced by a single enemy followed by a path of Rings. They must hit this enemy with the Homing Attack and then Light Speed Dash along the string of Rings to get to the other side.

The elevators that come after the bridge section are now only accessible if the player attacks the Gold Beetle at the right time.

The Level Up Item in Radical Highway is Shadow's Flame Ring. He needs the Air Shoes to obtain it easily, but it is also accessible by using a Spin Dash and jumping across a gap at the right moment.

Big can be seen on the wing of a blimp in this stage after the second rocket.

Radical Highway is filled with snow and used in the Dream Snowboard Cross event in Mario & Sonic at the Olympic Winter Games. The NiGHTS cameo in the background was removed and replaced with a neon Chao head.

In the in the Nintendo 3DS version of Sonic Generations, Radical Highway appears as a stage. 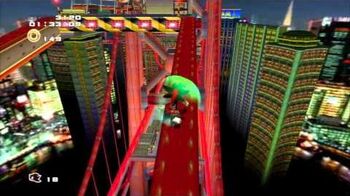 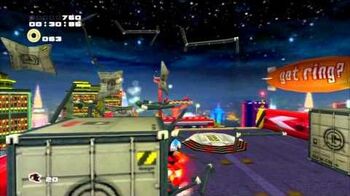 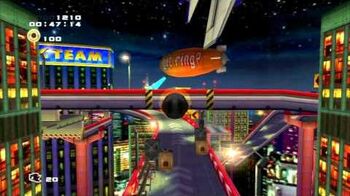 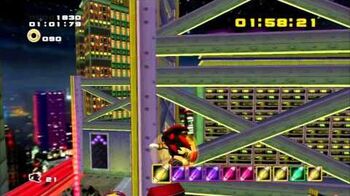 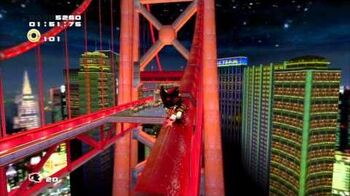