This is Flying Dog to Headquarters. Intruder found in the Security Hall. Preparing to attack.

The R-1/A Flying Dog is a boss that appears in the level Security Hall from Sonic Adventure 2. It is a G.U.N. robot controlled by a soldier.

The Flying Dog can fly smoothly in the air and at speeds surpassing those of both the B-3x Hot Shot and F-6t Big Foot. It can also fire a homing laser or attack with machine guns like its other variants, but at a faster rate.

R-1/A Flying Dog is fought after playing Security Hall, where it traps Rouge the Bat on Prison Island.

To defeat it, Rouge must use the cages around her by climbing up them, then jump off them and fly into the mech and hit it in the cockpit by using either the Screw Kick or by just gliding. After doing this multiple times, it will be defeated.

In the anime series Sonic X, the Flying Dog appeared during the Sonic Adventure 2 adaptation saga. In this media, they were constructed after the Perfect Chaos incident to combat Dr. Eggman's forces.

"It's just not possible... this flying dog can't be destroyed..."
—The Flying Dog, Sonic Adventure 2 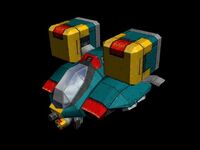 Model of Flying Dog
Add a photo to this gallery