Sonic News Network
Register
Don't have an account?
Sign In
Advertisement
in: Attacks and moves, Sonic and the Secret Rings, Sonic Unleashed (Xbox 360/PlayStation 3),
and 5 more

For the Mission in Sonic Origins, see Quick Step (Mission).

Sonic performing the Quick Step, from the Xbox 360/PlayStation 3 version of Sonic Unleashed.

A fast movement to the left or right while running.

The Quick Step (クイックステップ, Kuikku Suteppu?), also known as the Side Step,[1] is a move that appears in the Sonic the Hedgehog series. It is a technique that allows the user to move swiftly from side to side while running.

Fitting with its name, the Quick Step allows the user to make a swift-strafing movement to the left or right while running at high speeds. When using this move, the user often moves so fast that they appear as a blur.

In gameplay, the Quick Step primarily serves as a means for the player to avoid incoming obstacles, walls, drops in the road, or pits while running at high speed in the 3D sections of the levels. It can also be used to make precise movements while the player is running down narrow pathways. The move's speed will also be increased if used while the Boost is active.

The move first appeared in Sonic and the Secret Rings as a wind-elemental Ground Action Skill named Quick Step, which is used by Sonic. In gameplay, it grants the player smoother ground movements when moving left or right rather than enabling a sudden side step. There are also upgraded version of this Skill called "Quick High Step" and "Quick Mega Step".

To unlock the Quick Step in gameplay, Sonic must first reach level 7. The Skill will then automatically become available in the player's Skill inventory. After that, it can be equipped to Sonic at the cost of four Skill Points.

In the Xbox 360/PlayStation 3 version and Wii/PlayStation 2 version of Sonic Unleashed, the move is referred to as the Quick Step once more.[2][3] It returned as a part of Sonic's default moveset for the daytime levels. In this game, the Quick Step's mechanics were updated, giving the move its trademark sidestepping mechanics.

In the Wii version of Sonic Colors and the remaster Sonic Colors: Ultimate, the Quick Step[4] is used by both Sonic and the Virtual Hedgehogs.

In this game, the Quick Step was given offensive trails, allowing the player to destroy enemies by Quick Stepping into them. In addition, every Quick Step gives the player 1,000 points per-use, with a maximum of 100,000 points for each Act. In gameplay however, the Quick Step is only usable within specific parts of the Acts. When entering a Quick Step section, a special icon (showing a zigzagging arrow) will appear on the bottom of the screen while the icon of a control stick appears on the top of the screen.

In in the console/PC version of Sonic Generations, the move is again known as the Quick Step.[5] In this game, it is a maneuver used only by Modern Sonic and Modern Super Sonic.

In gameplay, the Quick Step returned to its basic mechanics from Sonic Unleashed, allowing the player to use a non-offensive Quick Step wherever they want. Also, during the rival battle against Shadow, Shadow will use the Quick Step while boosting in order to avoid crashing into the Meteorites when Sonic gets all the Energy Cores.

To perform the Quick Step in gameplay, the player has to use the following controls while in the 3D sections of the stages:

In Sonic Forces, the Quick Step is referred to as the Side Step.[1] In this game, it is used by Sonic, Super Sonic, Shadow and the Avatar. When performing the Quick Step however, the users simply do a sidestep rather a swift horizontal motion.

In Sonic Frontiers, the Quick Step is set to make an appearance as one of Sonic's moves. 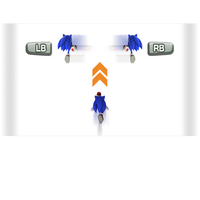