You may be looking for Boo.

A pumpkin ghost, from Sonic Heroes.

The pumpkin ghost[1] is an enemy that appears in the Sonic the Hedgehog series. It is a breed of ghosts residing in Hang Castle and Mystic Mansion, which can randomly appear and vanish at any time and harm their foes.

While the pumpkin ghosts do not attack the player directly, touching the ghosts will damage the player. Touching or attacking the ghosts though will cause them to disappear.

The pumpkin ghosts usually are found in confined spaces, such as behind unlockable doors, near switches, or in corridors. They will either stay still, slowly laughing to themselves, or encircle an area or route already tracked. There are two scales of the pumpkin ghost as well: Regular and large. In Hang Castle, there are also two extra large pumpkin ghosts located towards the beginning of the Stage and inside the tower, respectively. These ghosts are only encountered in Super Hard Mode.

They are most dangerous in the so-called "mystery room" at Mystic Mansion where they are crammed together tightly, while the subject team (Team Sonic, Team Dark, or Team Chaotix) has to activate three switches without being interrupted by the pumpkin ghosts. Team Chaotix instead has to extinguish all four torches. Thunder Shoot is recommended here to take out the pumpkin ghosts, however, they reappear a few seconds later so the switches should be activated quickly.

To prolong the effects of the disappearing of the pumpkin ghosts, Team Dark can use their Team Blast, Chaos Inferno to add an extra 10 seconds of free time to activate the switches, before escaping through a Light Dash ring trail. However, the player must remember that any pumpkin ghosts which have not disappeared, even in their stasis-like state, are still dangerous to the touch.

In Team Sonic's and Super Hard Mode's versions of Mystic Mansion, when taking the Speed path of the room with three altars (following the aforementioned "mystery room"), the player must use a series of Homing Attacks on the pumpkin ghosts that spawn to traverse back to the main platform.[2] 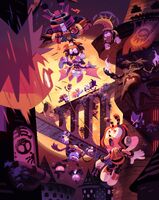