The Pulley in Sonic Unleashed.

Pulls the player to the top of slopes.

The traction engine with waistbind to pull off.

I can use this to keep going.

Pulleys are gimmicks that typically consist of two parts: a handle attached to a piece of wire, and a crane-based machine for reeling in the handle. The exact appearance of the Pully varies from game to game however.

Sometimes, Pulleys do not pull down their reel for the player to grab onto unless the player has defeated all enemies nearby or has pressed a switch close by. However, Pulleys can sometimes have different additional mechanics depending on the game's gameplay style.

Another, different type of pulleys are also featured in Launch Base Zone Act 2, which look like the red and yellow-colored hooks from the same Zone. These handles are attached to hovering Twin Hammer crates. By grabbing ahold of this Pulley, it will either pull the player up to the upper pathway or lower them down to a lower section.

In Sonic Adventure 2, and its remake Sonic Adventure 2: Battle, the Pulleys are one the main gimmicks in the game. In the American guide books, this gimmick is known simply as the Pulley,[5] while in Japan it known as the Upreel (アップリール, Appu Rīru?)/Downreel (ダウンリール, Daun Rīru?), depending on whether it takes the playable character upward or downward.

The Pulley's traction engine itself is a floating gray platform with red edges. Hanging from the bottom of this platform via a black wire is a red handle on a gray stock that has yellow and black hazard stripes painted on it.

In gameplay, the player can stand and jump on the Pulleys' traction engine like it is a regular platform. Also, when the player grabs the handle on the pulley, the handle will automatically move up/down while the playable character dangles from the handle.

Pulleys can be found in all three types of Stages in the game. During the Lock-on Shooting Stages in particular, both Tails and Dr. Eggman are able to shoot their enemy targets while hanging onto the Pulley. Pulleys are also featured during the Egg Golem fight. During this fight, the player can use the Pulleys to escape the quicksand pool at the bottom of the arena, just in case their playable character fall down there.

In Sonic Advance 3, the Pulleys resemble the ones from Sonic Adventure 2. In this game however, their floating plaforms (which are white on the top and red at the bottom) are set on the ceilings. Also, their handles are simple gray rings. The Pulleys only appear in Route 99 and in the second Mini-Game of the game.

In Sonic Heroes, the Pulleys look similar to how they appeared in Sonic Adventure 2. However, in this game, their floating traction engine platforms are replaced with smaller, floating devices that the player is unable to stand on. The Pulleys also have two traction wires instead of one, and their handle is a large ring with flashing details.

In Shadow the Hedgehog, the Pullys look like they did in Sonic Heroes. In this game, the Pulley allows for 360° rotation of one's view. In addition, the player can use weapons while hanging from them.

In Sonic the Hedgehog (2006), the Pulleys look much like they did in Sonic Heroes. Like their predecessors, they have a small floating traction engine platform each. However, the Pulleys in this game have blue-glowing traction wires, a yellow-white ring each for a handle, and a Bumper symbol where the Pulleys' wires connect with their handles.

Pulleys can be found in a few Action Stages, such as Sonic's version of Aquatic Base. In gameplay, there are also several Pulleys that can pull traction wires downward instead of pulling them up in hall sections, so that the player can safely move down by using them.

In both the Xbox 360/PlayStation 3 and Wii/PlayStation 2 version of Sonic Unleashed, the Pulley is known as the Crane Lift[2][6] (アップリール[3], Atsupurīru?). It is also given a new appearance. Instead of having floating traction platforms, the Pulleys' traction engines are red mechanical machines that are attached to the edges of steep walls and slopes. On the other end of their wires are red-colored square handles with a neon circle in the center.

The Pulleys are only encountered in the daytime stages, where the player can grab onto them to reach higher areas. In gameplay, they can now lift Sonic to the top faster than before. As a result, Sonic is automatically sent flying off the Pulley once it reaches the top. Also, the player sometimes has to destroy a certain amount of enemies in the vicinity of the Pulley in order to make its handle lower down to ground level so that Sonic can grab a hold of it. As of this game, Pulleys can now also be targeted with the Homing Attack (when their handles are down that is).

In the Wii version of Sonic Colors, the Pulleys looks exactly like they did in Sonic Unleashed.

In gameplay, the Pulleys can only be used to reach higher areas. They also function the same way they did in Sonic Unleashed; they send Sonic flying upward when their handles are reeled all the way to the top, and they will in some cases only lower their handle down for the playable character to grab onto once all nearby enemies are cleared out. Their handles can also be targeted with the Homing Attack.

Pulleys in the console/PC version of the game are only featured in Modern Sonic's Acts and Challenge Acts. In the Nintendo 3DS version on the other hand, they appear in both Classic and Modern Sonic's Acts. In gameplay, they work like they did in Sonic Unleashed; they send Sonic flying upward when their handles are reeled all the way to the top, and they will in some cases only lower their handle down for Modern Sonic to grab onto once all nearby enemies are destroyed. Their handles can also be targeted with the Homing Attack. Some of them can also lead to secret pathways.

In Sonic Mania, and its expansion Sonic Mania Plus, the Pulleys reuse the design they had in Sonic the Hedgehog 3. In this game however, their Spinning Wheels are black and orange, and their handles are yellow.

In Sonic Forces, the Pulleys looks exactly like they did in Sonic Unleashed. They also work like they did previous recent titles; they send the user flying upward when their handles are reeled all the way up, and they will sometimes only lower their handle down for the playable character to grab onto after all nearby enemies are beaten. Their handles can also be targeted with the Homing Attack/Wire Attack.

Pulleys in Sonic Forces are only found in the stages where Sonic and the Avatar is playable.

Models of the handles for the Pulley (right) and Zip Line (left) in Sonic Generations. 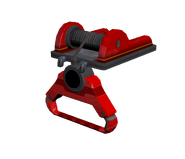 A model of the Pulley in Sonic Generations.
Add a photo to this gallery

Retrieved from "https://sonic.fandom.com/wiki/Pulley?oldid=2162874"
Community content is available under CC-BY-SA unless otherwise noted.